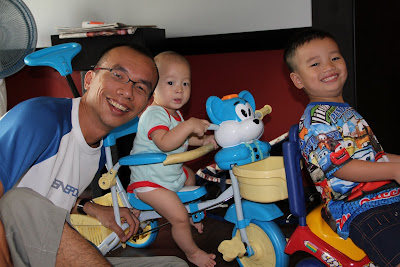 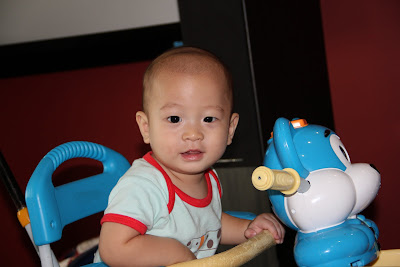 Asher's nickname is Manja, or Big Manja. This nickname was coined by my helper, Lina. "manja" is a malay word which means... actually I don't really know what it means. I think it means something like the chinese dialect term "dneh". But I dunno how to explain that either. But when some people ask me what it means, I usually just say it's like being "yang orh". Oh wait, that's a chinese dialect term too. Erm... I know! It's like being very affectionate, or seeking attention? Anyway, Asher likes being carried and he loves to snuggle up with hubbs and I, or Isaac and Shawna too for that matter. He is happy to lounge in bed lying next to us, or even leaning against us, or lying on us! :) 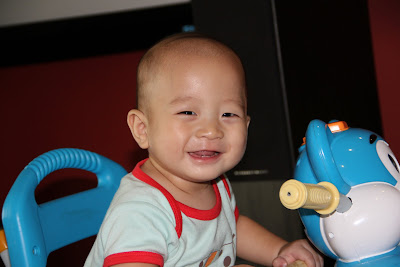 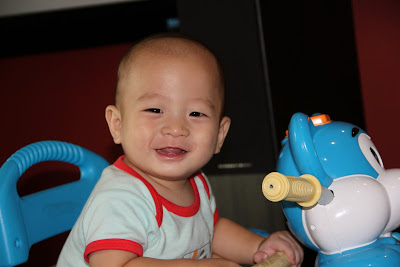 Currently, Asher and Shawna are still sleeping on the same single mattress. I put them each at one end, with a bolster in between to prevent them from crushing each other accidentally. However, sometimes when I forget to place the bolster, I notice that they tend to gravitate towards each other. I have read before, that twins tend to do that as they are used to sleeping next to one another just like they did in their mother's womb. Hence, I find it heartwarming when I see them sleeping next to one another. 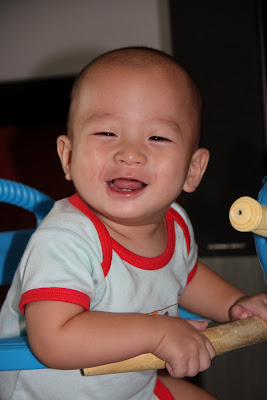 When Asher isn't in his "zen" and "cool" mood, he is usually very shy and bashful. His smiles are coy and charming in a quiet way. We predict that he is gonna be one heaven of a charmer indeed! The thing is, Isaac is also charming, but in a different way. It's interesting to see how different the kidzes all are! :)
Posted by Pamela at 15:23