Shawna is a good girl!

Look! We first shaved the twins' heads when they were 4 months old, and then we did it again when they were about 8 months old. Why? Coz they didn't have much hair, and shaving their heads help encourage hair growth. Yes, really. During Isaac's time, we weren't sure if it'd really work, so we tried it out on Isaac. And it did! Every time, after each shave, the hair grows back more densely. Think we shaved Isaac three times at least. Now, Shawna's hair has grown out pretty nicely, but Asher's still kinda thin - so we're contemplating shaving Asher again. Well actually hubbs wanted to shave Shawna too, but I said no :p 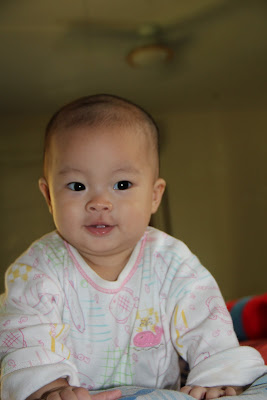 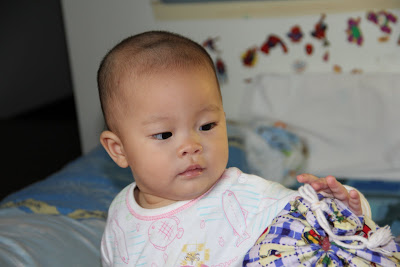 So after my previous post on Shawna - you must think she's one naughty girl. But I feel that she usually only reacts negatively (biting & beating) when she is provoked... so that's not really naughty, is it? That's self defence! Good for a girl to know self defence, ya know! But then again, there are times when she does bite her brothers although she wasn't provoked, so yeah, in those instances, she was naughty! :p

Though it makes us rather cautious when she is playing with other kids (that don't belong to us). I mean, it's one thing for her to bite her own siblings, but quite another for her to bite someone else. Would be so embarrassing! So, I make sure one of us is around to chaperone and try to prevent any kid from accidentally provoking her, or from any of her un-provoked attacks. 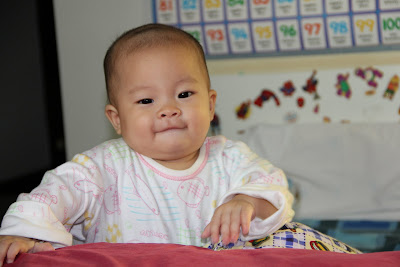 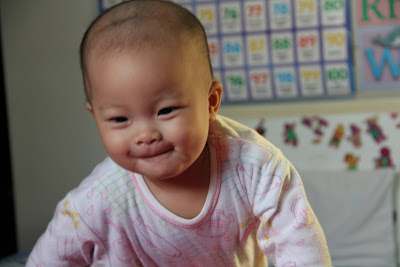 I have noticed though, that her "un-provoked attacks" on her brothers are usually in 2 veins. 1 vein, is the vicious inflict-pain-on-you bite, where she still doesn't feel vindicated from the previous 'wrong' that one of her brothers inflicted on her. And the other is the I-love-you-that's-why-I-bite-you-softly kind of bite - which really doesn't hurt. hehehe... yes, I confess! She might have learnt that last one from me! :p

I love "biting" the kids. They are so adorable! Just makes me wanna bite their backside or their heel or their arms and legs. (No, I'm not a bitch, I'm a Billy Goat Gruff :p) Sometimes I get too excited (or too passionate! hahaha) and I bite a little too hard - then Isaac will complain to hubbs "Papa, Mummy bite me!!!" Hubbs'd roll his eyes at me, sigh, and mock-scold "Mummy, can you stop biting Isaac, please!" kekeke... 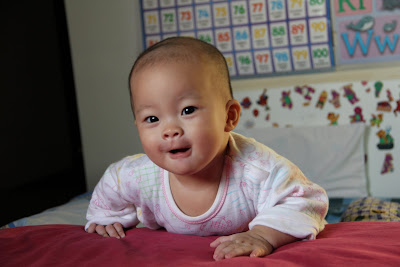 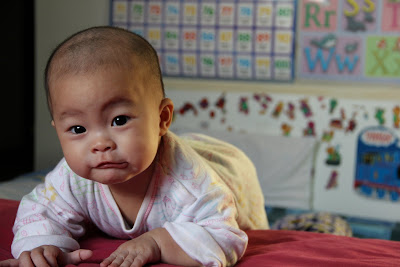 pix taken on 12th September 2010
Shawna @ 8 months plus
However, actually the point of this post, is that I wanted to tell you about how good girl Shawna is. She is actually very caring and takes good care of Asher. When she gets her water bottle, she will ask for Asher's and bring it to him for him to drink. If she gets a bit of food (bread or biscuit etc), she will ask for some more, and walk over to Asher to feed it to him.

She can listen to instructions very well, and would help us do little things like taking things, or throwing rubbish etc. In the mornings, she usually wakes up first. I would tell her, "Good morning, Shawna! :) Okay, go wake Isaac." and she would go over to Isaac and call him, trying to wake him up.

Oh yes! Both Asher & Shawna can "call" Isaac. They both pronounce it as "I-yac" - but it's quite clear that they're calling Isaac. As the twins are normally home all day, they often look forward to Isaac, hubbs and I coming home. Once the hears the front gate rattling, both Asher & Shawna will quickly walk over to the door, chanting "I-yac! I-yac!"The twins, especially Shawna, would also like to call hubbs "Papaaaaaaaa..... Papaaaaaa...." Funnily enough, they don't call me as much. But if hubbs and I came home at the same time, even though they'd be calling "I-yac! I-yac! Papaaaaaaaaa..." ... they'd bypass hubbs and Isaac and rush to me to give me a hug.... sigh.... hehehe... see! Action speaks louder than words!!! :p
Posted by Pamela at 09:23