Early on, even from the time of these pictures in September 2010, the following can often be heard in our house...
"Isaac! Don't shout at Shawna!"
"Don't push Shawna, Asher!"
"No, no, no, stop snatching that from Shawna!!!"
"Just give it to her, Isaac! Come on!"

If you think we're being overprotective of Shawna - you're wrong! She is very capable of looking out for herself - it's the boys we're trying to protect!!! 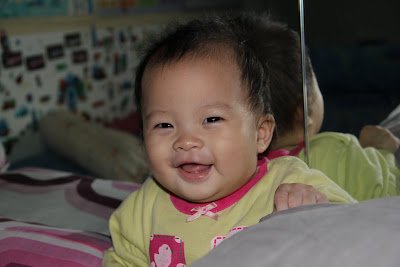 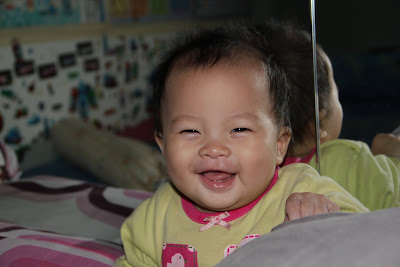 This is because... my sweet Shawna... is one feisty girl! From a very young age, Shawna would beat or bite her brothers whenever they provoke her. There's a very classic Shawna scene that we observed last time...

One of her brothers, either Asher or Isaac, would snatch something, say a toy, from her. Shawna would not cry, she would like at her brother, and snatch back the item. Then the brother would snatch it back again. Shawna, again, no sound no cry, would simply snatch it back again. Her brother (stubborn my kids are) would snatch the item again a 3rd time. This time, Shawna pauses, looks her brother sternly in the eye, and - in a flash - snatches back the item and uses the item to hit her brother 3 times *kok*kok*kok* on his head!!! Then she is satisfied, gets up, and walks away. Usually, by the time her brother recovers from the shock of the knocks on his head - would be crying to high heavens by now! 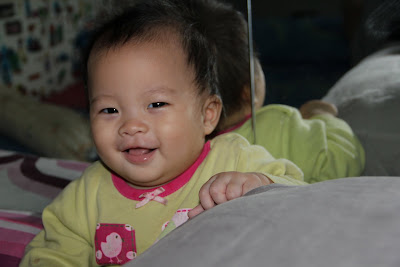 The above scenario was observed many times by myself, and even other people like hubbs, my MIL and my helper etc. It's almost as if Shawna gives her brother/s 2 chances, before she takes "action"! Also, quite a few times, I saw the variation towards the end, that she doesn't snatch back the item - instead, she just uses her hand to hit her brother's head three times before walking away (and "giving up" the item!).

Nowadays, she also varies this by biting her brother/s. And she is one terror biter too! She bites HARD! In addition, she often bites and pulls (with her teeth) the flesh, before "letting go" - making it one painful bite indeed! 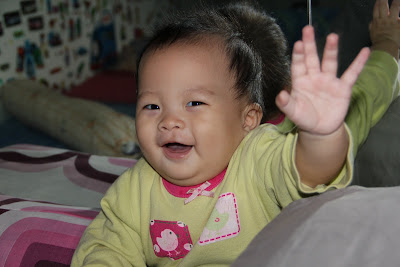 pix taken on 16th September 2010
Shawna @ 8 months and 10 days
Poor Asher is often at the biting end since he spends the most time with her. However, he kinda really asks for it, sometimes. That's coz Asher likes to push Shawna, and he likes to snatch whatever it is she is holding/looking at/playing with... etc. It's exasperating. So we're like "Stop Asher! Stop! Shawna bite you then you know!!!" But this boy is also one stubborn boy - he doesn't stop! He'd always push her off the chair coz he wants to sit in it... push her off the box coz he wants to climb it too... snatches stuff from her... really really... asking for it. So, we can only do our best to be on the lookout to grab Shawna away from Asher (or vice versa!) when we see Shawna baring her teeth raring for a bite!!! Shawna also likes to grab Asher's feet and bite his toes!?!

Isaac is the 2nd most popular victim after Asher. However, Isaac, like Asher, is also... really asking for it. He likes to shout at Shawna. Shouting is part of his anger management repertoire. Isaac most often gets frustrated with his brother and sister when they disrupt his plays: like when he plays with his Thomas the Engine & the tracks or when he is playing a boardgame with us (which is like every night). Asher & Shawna, curious they are, and enthusiastic they are, want to join in the fun, you see. So they also wanna use the boardgame bits (the play pieces) to move them around the board, or slap down cards, or whatever the game entails. But more often than not, they don't know what they're doing and hence often messes up the board - making Isaac fume.... and so, when he gets angry... he shouts:" RRAAAAAAAHHHHHH!!!!!!!!!!" Yes, "RAH" like a lion. Yes. hahahahahahaha... (more on his 'anger management' another post). So all this shouting provokes Shawna... and... she bites him.