The twins at home

I decided that I wasn't taking enough pix of the twins in their daily routine, that I wasn't doing a good job of chronicling their days... So on these two days, I just took quite a bit of random shots of them at home.

Guess who's this below? 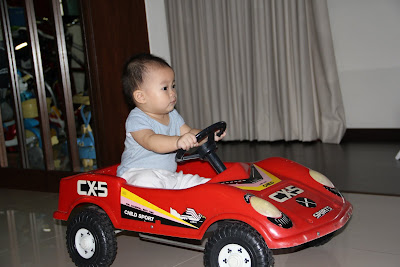 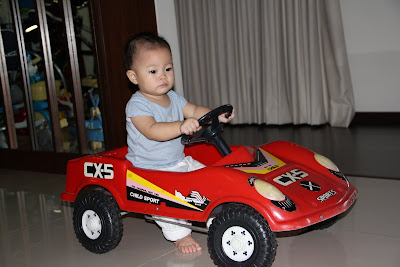 Yes, the above is actually Shawna :) At that time, her hair was still short after the shave at 8 months. I actually found this old-school car, at my void deck one day, beside the dust bin. I'd always had this thing for cars, and so, I quickly picked it up and brought it home. I never had a pedal car of my own when I was young, so now, I made sure my kids had them :) pity I can't get in/on any of them. Hmmm... maybe I should get started on that diet of mine... 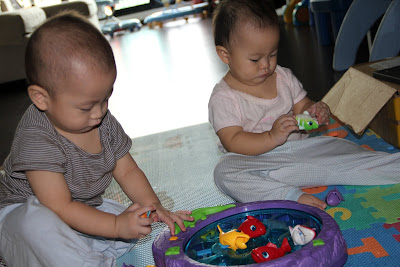 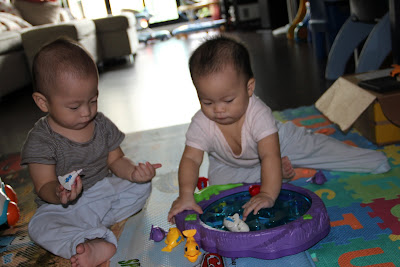 At the time of these pix in early November 2010, at 10 months old, the twins were just playing with the fishes as toys. But about half a year on, as of about June 2011, the twins started being able to actually hold the fishing rod, and successfully catch(hook) the fish! It thrills me to see that they can do it as it reminds me that this was one of Isaac's first games that he could play properly, as well. This heralds the era of their coming of age! The age where they can start to play games! YAY!!! hahahaha... 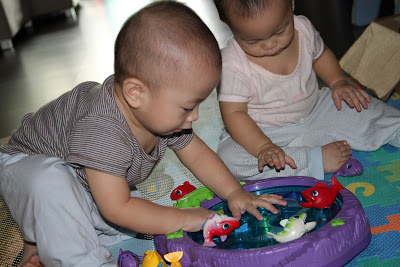 I thrifted this game from my church's thrift store. "Thrifted" in BoardgameGeek speak is to have bought this game from a thrift store, a thrift store being a store "that sells secondhand articles and especially clothes and is often run for charitable purposes" (definition by Merriam-Webster online). My church's thrift store sells loadsa stuff - clothes, books, bags, toys, anything and everything that our church members throw out during spring cleaning, I suppose. Hubbs hurt his knees very badly some time ago, and needed a pair of crutches for a few weeks - the first place we went to search for a pair was our church Thrift Store - and we scored! Bought a pair of crutches for just $8, was in a great condition too, looked almost new.

So as I was saying, I thrifted this cat & mouse game. 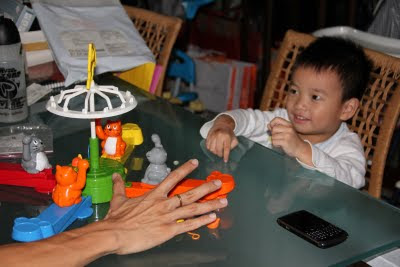 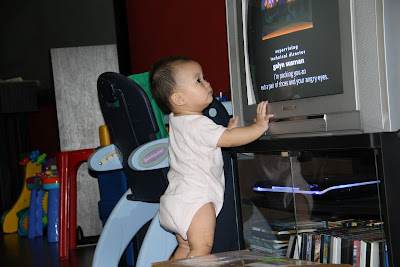 At that time in November 2010, we still had this 29" CRT TV. It's the kids' tv. But it's got no tv reception. It can only play dvds. This is so that I can decide what they watch... hahaha yes yes, control freak mummy here. But also coz it was quite a distance from the tv point, and there was already another tv at the tv point - that tv was for my parents in law (who are sorta addicted to tv). So anyway, we have this tv for the kids to watch. Usually, they only watch their dvds during meal times. At other times, we prefer to read to them, or play games with them, or bring them to the playground etc. 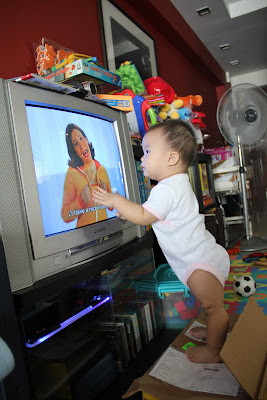 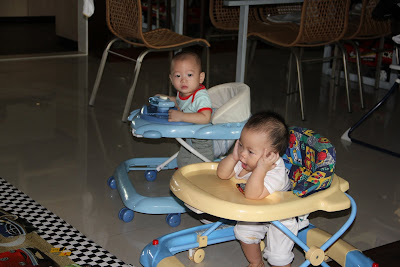 See how we placed the big playmat on the ground between the tv and the kids on their walkers? This was to ensure the minimum distance between the kids and the tv. We try our best to make sure that the kids sit at least 2 to 3 metres away from the tv. In their walkers, they'd be stopped by the mat. When they're sitting, we'd place them at the far end of the mat. I would tell Isaac:"Go sit on Filmore!" (the green van from Cars, which is on the mat). 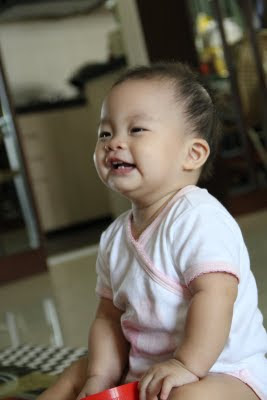 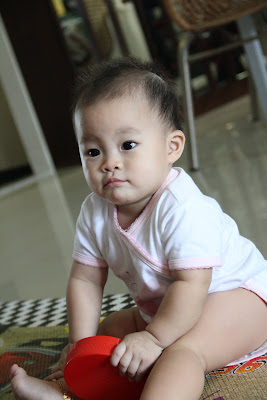 But of course, the babies find it hard to resist the bright lights of the tube. So they like to go up close to the tv. So, one day, my sister-in-law passed us a LCD screen. As it was slimmer than a CRT tv, I could have it placed on the brown shelf, which is taller than the tv console that this CRT is on. So now, the tv is much higher up. Which means the kids can't come so close anymore, and also, to be at a comfortable viewing angle, they HAVE to sit further away from the tv! kekeke... :p 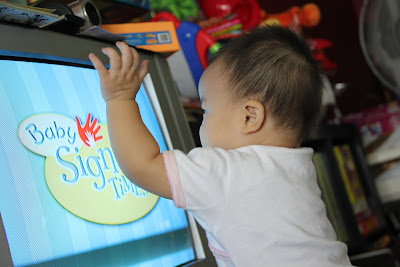 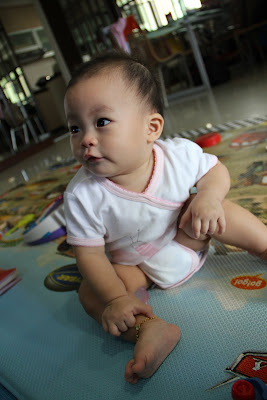 Yes, the kids watch Baby Signing Time :) They loved it. But Shawna seems more adept at signing than Asher does. Initially, I thought Asher didn't know how to. But after a few incidents when Asher signed out of necessity, I realised that he DID know how to sign, just that he doesn't bother himself to do so when he doesn't really need to do it!!! *hiaz*!!!(dunno what to say! hahaha!) 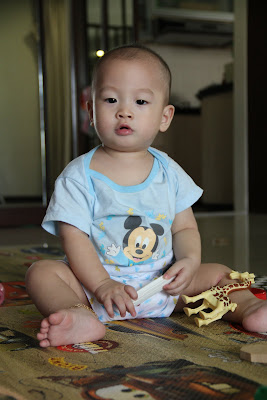 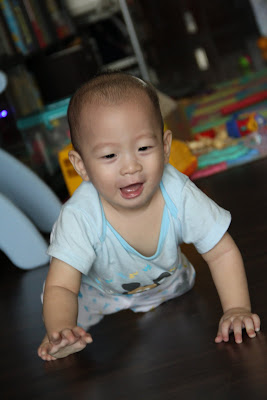 At 10 months - Asher and Shawna were crawling very well. Shawna also started training herself to stand up on her own, without support. She's a very determined girl - once she sets her mind to do something, she'd persevere and go through with it. She decided she wanted to learn how to stand, and so she did. She practiced again and again, until she could stand. She didn't want us to hold her, she'd just use her thigh muscles and balance herself, get into a squatting position, and just stand up like that. Power! Asher? Asher's just very contented sitting in my lap :) 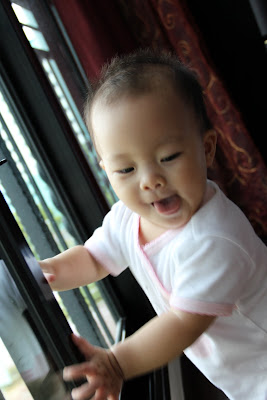 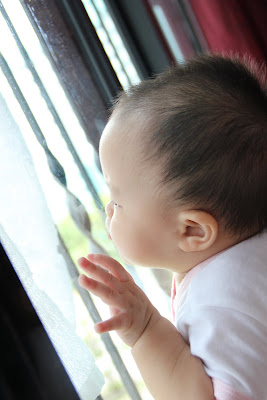 Shawna taught herself to walk at 11 months. Again, just like the standing, she decided she liked the sensation of walking, and the benefits it entails (mainly, greater mobility and hence more freedom) and so she set her mind to teach herself how to walk. Again, without much aid from us, she learnt to walk simply by trying and trying and trying again. 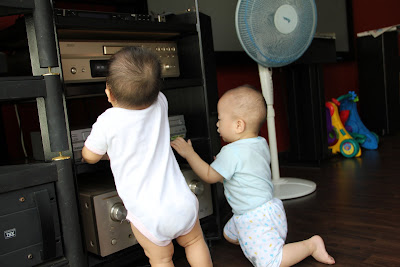 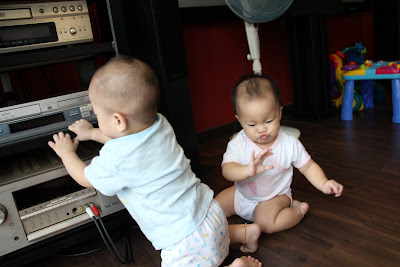 Above, Asher and Shawna having a go at the many knobs and dials on hubbs' home theatre system. Yes, we have a home theatre system, complete with a 5.1 speaker system, a home theatre projector, and a 100 inch fixed screen =) We're movie buffs! With Isaac, we started watching movies again at home, with all lights off, sound system on, when Isaac was 6 months old. With the twins, we started much earlier, think when they were about 3 months old. So, they have no problem with the pitch darkness before the movie starts, and during the movie, when it is all dark except for the movie images - yes, just like in a movie theatre... 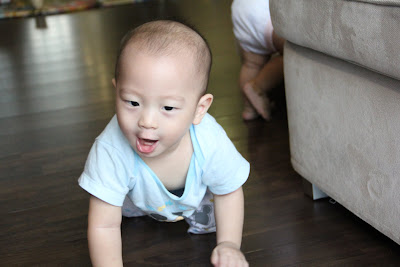 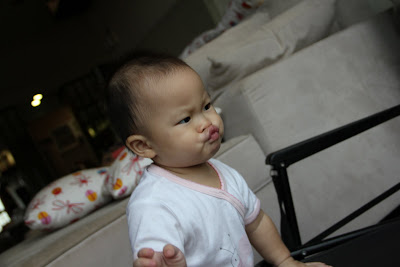 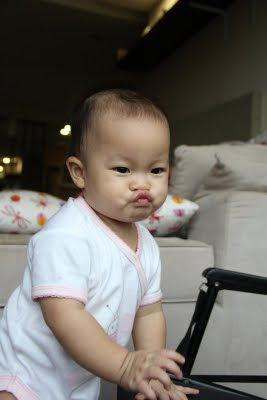 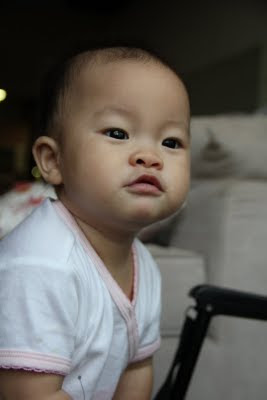