You guys know what a gamer I am. So I was eager to get Isaac started to become a gamer too. I started him on his first game at the young and tender age of 17 months. He's come a long way since then... We enjoy seeing how he learns and progress through games :) 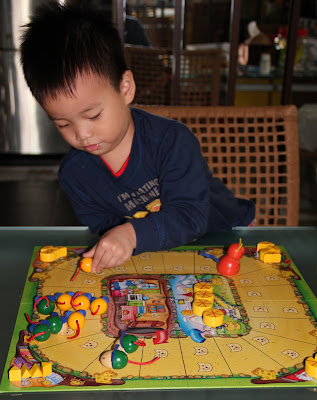 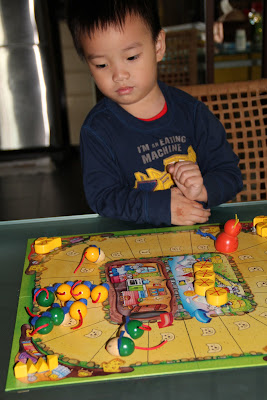 This is Viva Topo, one of the best kids games, period. Basically, each player commandeers a team of mice, whose aim is to get as many slices of cheese as possible before the cat catches up with them and gobbles them (the mice, not the cheese) up! It's an excellent game to teach the "high risk, high reward" concept. 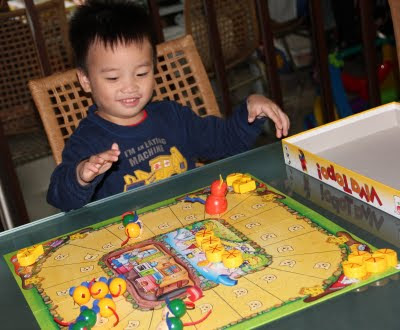 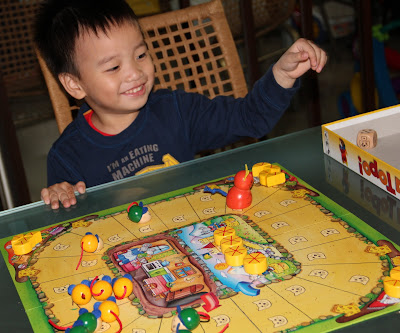 Ironically, with this cautious attitude, Isaac almost always manages to win this game over me and hubbs - coz hubbs and I are usually more greedy, so we try to keep our mice in the race to go for the larger pieces of cheese! That's the good thing about this game too, it is also entertaining for adults, we are almost always happy to play with Isaac this game, unless the time is late and he wants another go at it. Even my mother enjoys playing this game, judging from her "Quick, Isaac, move! Popo wants to quickly run already, the Cat is coming!!!" 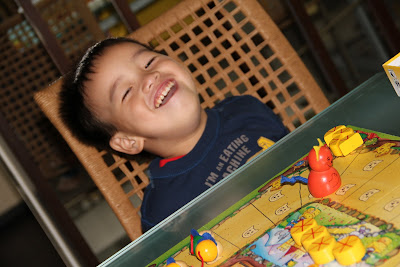 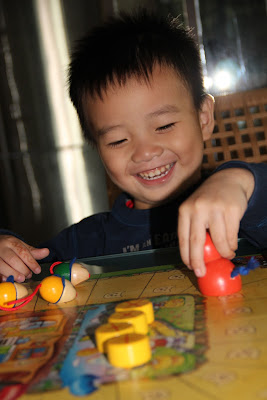 See Isaac turning the cat around? Haha, he's smiling now. But actually, the day before these pix were taken, he was crying when we were playing this game... coz, you see, the safe thing to do is to keep your mice behind the cat always, since the animals only move in the clockwise direction. So, so long as you do not overtake the cat, your mice would be safe. But the previous day, while playing with Isaac, hubbs jokingly turned the cat around to say "RAAAHHH!!!" to Isaac's mice who was (cautiously) position right behind the cat! Isaac got a shock at the sudden turn and shout that he started bawling loudly! It was really quite funny, but Isaac was sooooo distressed. After much explanation that his father was just joking, Isaac saw the funny side of the situation... Thereafter, he enjoyed turning the cat back to "RAAH!" other mice during the game too :) 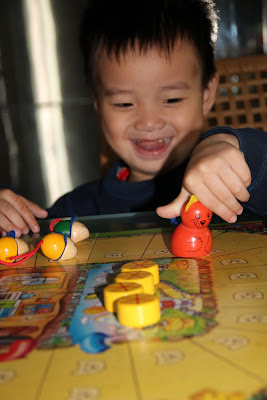 Would be great fun when the twins are older and we can all play these together. Then we can see how much of a risk-taker each kid is! :)