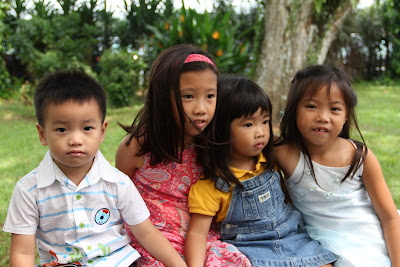 Post written in Feb 2012, backposted to 1st Jan 2011. Yes, I know, more than a year late... ah wellz... better late than never :) I'm also trying out blogger's new interface - which is a bit too smart for me, so if the formating looks weird, yes, it's a lil my fault, but mostly blogger's fault :p

We celebrated the twins birthday on 1st Jan 2011, coz it was a public holiday, and coz 6th Jan 2011 fell on a weekday (a Thursday, if you're wondering), and traditionally, Chinese believe that you should only celebrate birthdays in advance, but never belated. I wonder who set such 'rules' to begin with. It's silly, if you ask me. But some things are not worth arguing over, and some "rules" are quite harmless to follow, and so people of our generation usually just shift our schedule around to follow these (probably archaic) "rules". 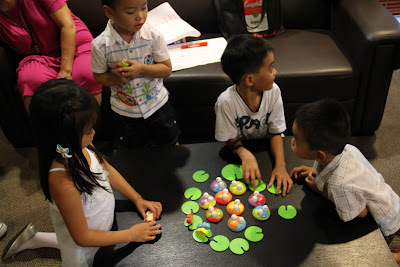 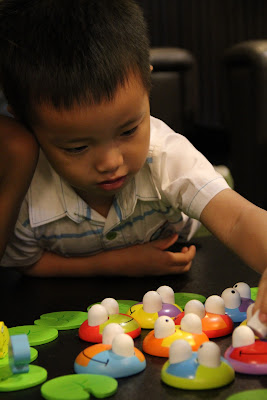 Hubbs managed to book this huge function room at the MOE Recreation Club at Evans Road. It was nice and huge, had grounds outside for the kids to run around and play frisbee and catching. There was even a grassy slope that the kids started climbing, until some got hurt and they naturally wised up and stopped... 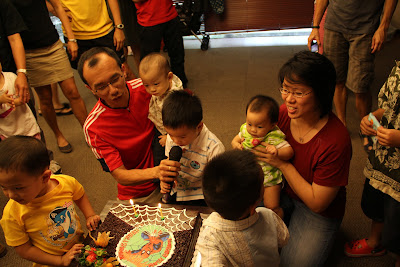 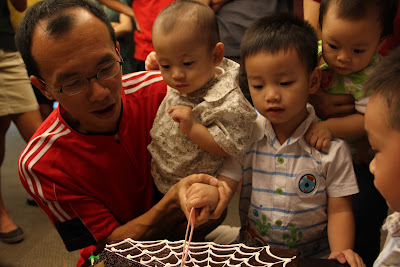 As you can see, I had our usual Spiderman cake made. Yes, Spidey cake for Spidey kids okay. That's always the case for 1 year old Spidey Tan Family babies. Yes, because I say so ;p Besides, the kids wouldn't know the difference, right? Also, the first year birthday is not only to celebrate the first year of the kid's life. It is also to celebrate the parents surviving the first, and toughest (in our humblest opinions) year of the kid's life. Yes, indeed, a celebration of life - that we have lived through that year! 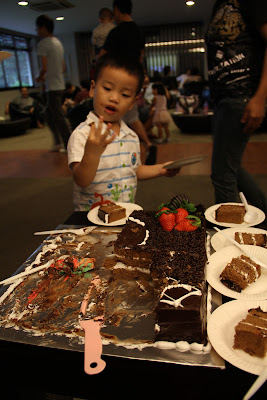 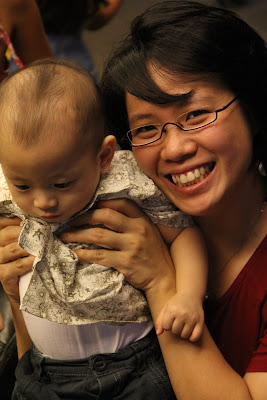 Indeed, looking back, 2010 was very tough for us all. The twins were born on 6th Jan 2010. Those of you who are parents would know, that having one infant to take care of is tough enough. Having two... really takes the cake. (I can't even start to imagine how having triplets would be!) So we had two little infants to take care of. Double the diapers to change, double the time I had to spend breastfeeding them, double the crying, double the bathing, double the everything. On top of that, we still had to cater to Isaac's increasing demands for attention. And to make it worse, because we started Isaac on childcare, he (understandably) caught viruses and bugs and whatnot - came back and passed them to us too. Bad for Isaac, worse for babies, and hell if we adults got it too.
In June 2010, it happened. Hubbs had been sick for a long time, with cough and whatnot, remnants that never faded with an earlier episode of when Isaac came back with a cough/flu (I can't remember), got fever. Either Isaac or hubbs passed something to the twins... Asher came down with croup, triggered by whatever it was Isaac passed him. We brought him to KK Hospital Children's Emergency, but coz he was less than 6 months old and had difficulty breathing, he was admitted to stay in hospital. I stayed with him. We were there for two days. Meanwhile, my mother-in-law who was staying with us to help out with taking care of the kids came down with the bug too. From the hospital, I told hubbs to bring Shawna to my parents place to quarantine her from everyone at home who was sick. My helper soon came down with the bug too.
After two days in hospital, we discharged, and went straight to my parents place, intending to stay there to keep away from all the sick recovering back home... but when I saw Shawna, and heard her breathing... I went back in to KKH with Shawna - she had developed croup too. I checked into KKH with Shawna the same day that I had discharged with Asher. I spent my third consecutive night in hospital.Back home, my father-in-law had fallen ill as well. But thankfully, Isaac was better already, and my mother-in-law and helper could rest since the twins weren't home.The following day, I discharged with Shawna and went to stay with Asher and Shawna at my parents place. My mum started sniffling too. And two days later, I started to cough as well. Thankfully though, by the time I fell to the incredi-bug, everyone else was well, and so, I could finally rest, after a very trying week. These two weeks were the most challenging period of the first year of the twins lives for us. Within the first 6 months of the twins' birth, hubbs lost 10 kg. Yes, seriously.
Thank heavens, that episode was not repeated again, and we're praying that it never will. Every time I pray now, the first thing I pray for is good health for my kids and everyone we know. We are also thankful for the amount of family support we had, for without them, we would not have been able to cope with Isaac and the twins. We were also blessed with good a good helper Lina, whom we hope would continue to be a good helper.
When people realise that we have three kids, of which two are a pair of twins, there are invariably two comments. Those who are not married or who do not have kids, will comment:"Wah!!! Twins!!! I want!!!" Those who themselves are parents would comment:"Wah, not easy ah, twins. One already cannot cope..." :) To this we'd reply:"Luckily God sent us Isaac for training first! :)"

Yes, having twins is not easy indeed. But we wouldn't change it for the world.We love you, Asher & Shawna, happy birthday! :)