New stuff for the New Year!

3rd February 2011 - the first day of Chinese New Year! Look who's first up? Shawna! She's playing with the thermometer, trying to take her own temperature. Her brothers are still fast asleep. They look very much alike when they're asleep, yes? 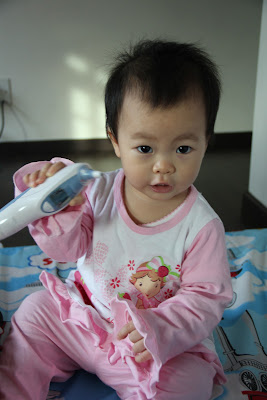 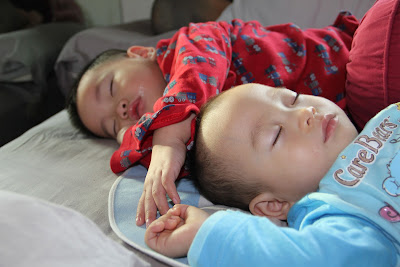 When I was young, as far back as I can remember, my mother would always get us new stuff for Chinese New Year. And it wasn't just the new clothes for wearing out on the first few days of the new year, it was much more than that. Other than the new clothes and new shoes for wearing out to go visiting, we had new pyjamas, new toothbrush, new towels. I'd always loved getting new pyjamas :) So ever since Isaac was born, every year before Chinese New Year, I'd make sure to get him new pyjamas as well. Here are the kidzes in their new pjs for 2011.

I love shopping for these new pjs. I enjoyed it so much, that, a few years ago, I started to buy new pjs for my nieces too. Each of the kids have their own preference or current favourite colour etc - which makes my task a little challenging sometimes, but hey, I love the challenge! They'd usually wear anything I buy, but it's all the more satisfying when I buy them something they like. 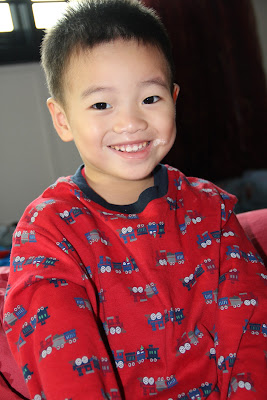 At this time in 2011, Asher and Shawna have yet to have any preference for colours, so I tend to get them the usual pink for Shawna and blue for Asher. Usually they'd have a matching pair of pjs too - 2011 had them in a matching "I love Mum" and "I love Dad" pjs. Isaac loves red, and dinosaurs and Thomas. So this year, he has a red pair (the one in the pics), a set with dinosaurs, and a set of Thomas the Engine pjs.

Rebecca likes blue, and Hello Kitty. She is fine with wearing long sleeve shirt and pyjama pants. She's also rather tall, so I make sure to get stuff which she wouldn't outgrow before the end of the year. Isabelle also likes Hello Kitty. She likes pink, and she doesn't like to wear pyjama pants. She likes the dress/nightie sort of pyjamas, so  I have to find those for her. The initial years I had trouble looking for those, but now I know where to get them from. Natalie loves the colour yellow. Anything that's yellow, she loves it. Luckily she is alright with wearing pants too, coz it's tough enough finding yellow pyjamas, but if she wanted yellow dress/nighty - now that'd be super tough!

Lately, I'd also taken to buying new underwear for them all. hehehe... it's fun!!! Usually get them a whole set of underwear in a cartoon character. 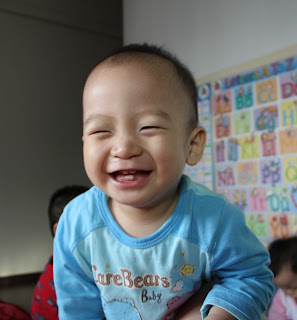 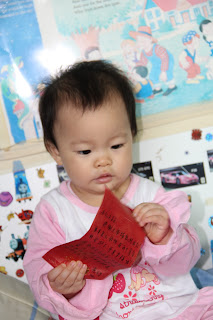 Hubbs was quite amused at me buying all these new stuff. He said he didn't grow up with this "tradition" of having new pyjamas,new towels and new toothbrush for Chinese New Year. Before we had kids, he just allowed me to do all the buying. I'd change the towels and the toothbrushes before midnight on the eve of the Chinese New Year. And before that, I'd have bought him new underwear, new socks and made sure he has some new articles of clothing.

His tradition though, was to write a nice blessing on the back of the red packet for the kids, and tuck it into them at night when they sleep, so that they wake up to finding the angpow in the morning. Look at Shawna examining her ang pow. Blessings written in Chinese, no less. 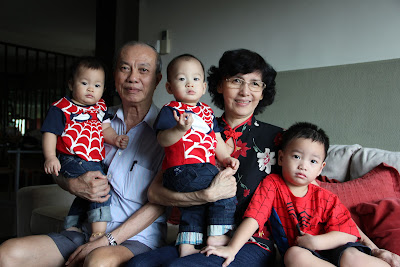 I think it's nice to have traditions like that. It kind of makes your life more memorable, in a sense. In 2011, my in laws are staying with us during Chinese New Year. So here is the Chinese New Year picture with their 3 grandchildren, dressed in their Spidey togs.

In the many years to come, when the kidzes are all grown up with their own spouse and children, I hope they keep up this tradition of getting new pyjamas, blessings written on the angpow, and come visit hubbs and I for our big family picture - and hubbs and I can get our picture with all my grandkids too! :)
Posted by Pamela at 10:40 No comments:

Chinese New Year Eve 2011. It is a Chinese tradition that on the eve of the Chinese New Year, you were supposed to spend that night having a meal with your family. It is also traditional that the Reunion Dinner on the eve, is eaten with the male side of the family. That's why the reunion dinner with my parents and my sister's family, was eaten the Saturday before Chinese New Year. That also explains why my sister-in-law and her husband isn't in this picture, coz they are over at the husband's side.

My parents-in-law moved in with us when the twins were born. Before, when it was just Isaac, I used to send Isaac to my in-laws' place before going to work. But when we knew we were having twins, we knew it would be impossible for me to ferry all three kids to my in-laws' place before going to work, even if I did have a helper helping out. It was simply too disruptive and too much of a hassle. As a result, my in-laws came to stay with us instead.

So this reunion dinner was a milestone of sorts. It was a dinner of thanksgiving, that we had three lovely kids, and a very supporting family behind us, and that we, as a family, have survived and came through well - the first 12 months of the twins lives. Many people have said that I'm a wonder mummy. I say I couldn't have done it without the excellent help and support from my husband and our families :)
Posted by Pamela at 23:30 No comments: