Hahaha I'd always wanted to do that - name a blogpost "Random". Why? That's coz I would have never thought of doing it. But like last year, there was a time, when I discovered some young people (defined as young working adults younger than me - sob sob, once upon a time, I was these people, but now I'm no longer one of the youngest in the workplace! sob sob). I digress. Anyway, one time (a few times), I was reading some young people's blog, and these people (so not just one blog, but many blogs) titled a lot of their blog posts "Random". And it's not just one person (blog) but many people do that! In the end, I noticed that the common denominator, was that these people are all younger than me. Sob. Generation gap. Must be! What other explanation can there be!?!? :p

Oh! I was inspired to name this post "Random" coz the 3 mobile phone pix (uploaded to facebook)below have no connection (sorta). So... very... RANDOM... lor!!! HAHAHHAHA :p kekeke... 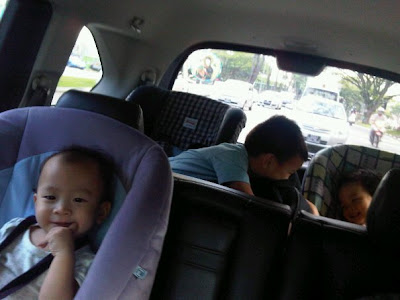 8th April 2011. Asher, Isaac and Shawna in the car - in their child seats. I wanted to take this picture, to chronicle the days that we have to have 3 child seats in the car. With 3 child seats, our 8-seater Honda Freed is reduced to being a 6 seater car. Which is just right for us - hubbs and I, the kidzes, and our helper. If we need to ferry someone, out goes one or more child seats. Same, if we need boot space. It's a hassle, yes, but I wanna train the kidzes to sit in their car child seat. They're really much easier to handle when they're all seated. Asher & Shawna, have (thankfully) taken to the child seat much better than Isaac did at that age. 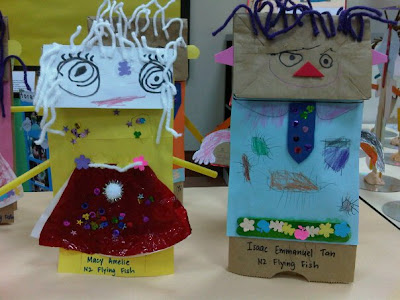 March 2011. Macy & Isaac's puppets that they did in school (childcare). I love taking pix of his art and craft etc :) (Much easier to keep than the actual stuff themselves!) Cute puppets!!! 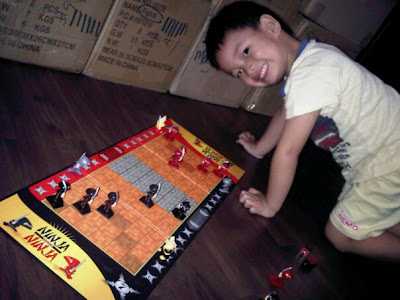 13th April 2011 Isaac was very sick this week, fever and cough etc. Didn't go to school the whole week. And I was in between jobs, so I got to be home with him a bit. We spent quite a lot of time playing games that week. (And playing his choo choo train - his Thomas and Friends train tracks - but that's another picture, and another story...) So, this picture above, is of us playing Ninja Versus Ninja. It's one of his favourites at the moment. He won this game that we played too! (I was close behind, ok. Just 1 point behind!!!) I like this game too. But actually, I think it is not so suited for Isaac's age, as it is cheemer (tougher) than it looks. I think he will enjoy it more when he is older. But then, he enjoys it now already, so *shrug* better still!!! :) Read more about the game here http://www.myfirstgames.sg/ninja-versus-ninja.html