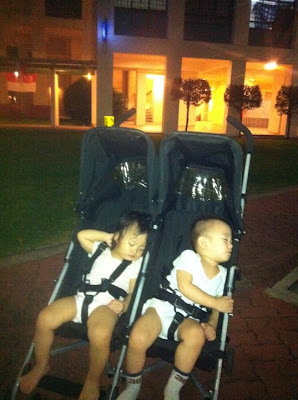 hubbs posted this onto his facebook on 28th July 2011 - he was just done with his 'duty' that night - getting the twins to sleep! :) He'd bring the Asher & Shawna downstairs for a stroll in the stroller while I am upstairs with Isaac going through his night time routine, before bedtime.

Lately though, we've been having problem playing boardgames - coz the twins wish to join in! I think it is good that they wanna join in - that they are showing interest. But then Isaac isn't as patient or as "forgiving"with them as we are, when the twin don't "play properly". I used to insist that we play at the dining table instead of on the floor, where the twins would "disturb" us. But since the twins got more mobile and are very good at climbing the dining chairs in order to join in our games... Isaac has been getting very frustrated. He'd be very pissed when his game is being disturbed and he'd either shout and scream at the twins or he'd end up crying "Somebody, take the babies away!!!" So... we haven't been playing as much as we'd like to lately. 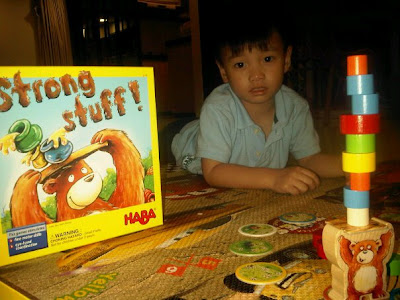 But recently, when hubbs takes the babies down for their night time stroll, I managed to break out a quick game with Isaac before we start reading the books. Like on Tuesday night, we managed to play 5 rounds of Strong Stuff (aka Barenstark) before we went to the bedroom to read.