Hello!!! Sorry for disappearing for so long! Been busy, kids sick, plus we went traveling! Yes! We packed up all three kids and went off to Western Australia for about 10 days in mid June 2011. Below are the two mobile upload pix that hubbs and I uploaded to our facebook, before we boarded the flight. 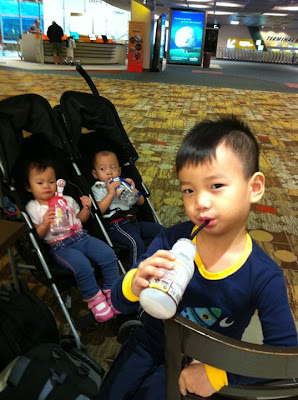 Below: my pic. My description was:"Our bags are loaded, we're ready to go..." 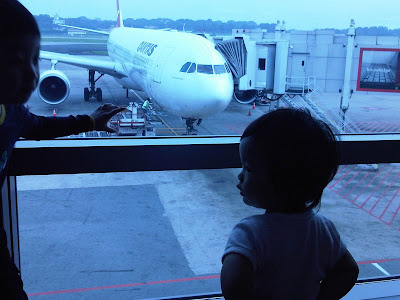 Rest of the pix would be uploaded soon yeah. Though was quite an effort getting it up on facebook, but I think it would be nice to have them here as well...

It was a fantastic trip. Absolutely exhausting, sure. But great fun. Was totally fab coz it was a Cuzzies' trip! The adults were all cousins, and their respective kids! So, me & hubbs + 3 kids, plus my sister & hubby + 3 kids, plus my cousin, plus another cousin & wife + 3 kids = 7 adults & 9 kids!!! are we crazy, or what?! kekeke... Kids ages range from 8 years to 18 months... The kids had a blast! Playing together all day and night, here there and everywhere, they had loadsa fun!

Ever since we got back from Perth, Isaac still thinks about the trip a lot. He now knew the names of all the cousins and uncle and auntie he had in Australia... Ee Yew Hui, Uncle Joel, Auntie Andrea, Jarrod kor kor, Zachary kor kor and Caitlin - the names just rolled off his tongue.

We could tell he really loved it, and would love to go on a Cuzzies Trip again. The next morning after the day we came back to Singapore, I overheard him talking to Shawna after Shawna did something wrong... Isaac:" Shawna, you better behave yourself ah... if not, you cannot go Australia... EVER AGAIN!!!" hahaha... this was reminiscent of us telling him (before the trip):"Isaac! You must be a good boy. If you're not a good boy, then you don't go Australia ah..."

Then a couple days after that, early in the morning, the first thing he said when he woke up was:"Auntie Andrea, Jarrod, Zachary..."
Me: "Why Isaac? Did you dream of Auntie Andrea, Jarrod and Zachary?"
Isaac: " What is dream?"
Me: "Ermm... dream is when you see pictures of them in your sleep... Did you dream of them?"
Isaac: "Yes..."
Then he proceeded to tell me what Auntie Andrea was doing in his dream, but I couldn't make head or tail of it...

The next day, we woke up, lounging about in bed, talking and then he mentioned his cousins...
Me: "Do you know how many cousins do you have?"
Isaac: "Three! Rebecca, Isabelle and Natalie!"
Me: "Hahaha... yes, they're your cousins, but you have more! Still have Jarrod..."
Isaac: "Zachary and Caitlin!"
Me: "Yes, and Dylan and Daylin too! So how many do you have?"
So we counted them as Isaac said the names out...
Me: "Do you know who are MY cousins?"
Isaac nodded: "Ee Ee Yew Hui and Uncle Joel!!!"
Me: "That's right!!! Excellent!!!"
Isaac: "and Auntie Andrea!!!"
Me: "Hmmm... actually Auntie Andrea is... do you know who she is?"
Isaac: "She is Jarrod & Zachary's mummy!"
Me: "Yes, so she is actually Uncle Joel's wife... Just like Mummy is Papa's wife, and so Papa is Mummy's husband!"
Isaac: "And Uncle Joel is Auntie Andrea's husband!"
Me: "THAT'S RIGHT! Excellent!!!"

And then, a few days later, I was parking the car, and there was a man getting out of the car next to ours, and Isaac exclaimed: "Mummy! That uncle looks like Uncle Joel!!!" I turned and looked, and he was right! The man had the same built as Joel, similarly dark skin tone, short hair and a pair of Oakley sunglasses perched on top of his head - much like how Joel likes to wear his sunglasses. I was impressed :) he DID look like Joel!

Then last night, when we just got home, and we were at the door to our place, taking off our shoes, when Isaac suddenly said: "Mummy! This would be a GREAT place for us to play hide and seek when Jarrod & Zachary come!" This kinda took me by surprise and I managed to stammer out a "Yes, it would..." Thankfully Isaac didn't ask when they'd be coming... coz nobody knows when they'd be back... sighz! (Fodder for a separate, depressing blogpost...).

So anywayz, yes! as you can tell, Isaac had an absolute blast! Now, if I want him to behave, I'd just say... "Isaac, you better behave... or you'd never go Australia EVER AGAIN!!!" ;p