This is Cheese Snatching by HABA. I'd gotten it sometime back, and didn't manage to break it out until recently. I had read about it off a fellow BoardgameGeek (Mark Jackson's website http://akapastorguy.blogspot.com/) and so I wanted to try it out. Mark's tried many of HABA's games, and often, his opinions are mirrored by mine, so I was keen to try this game since he'd given it a positive review. 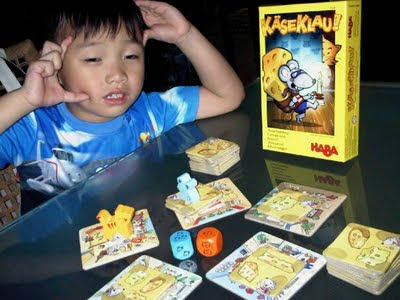 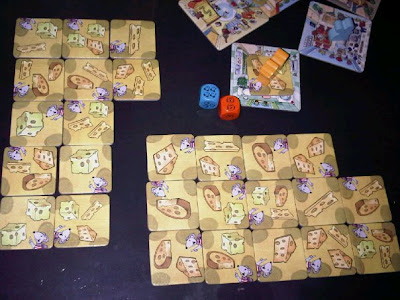 It was a neat little push-your-luck game which had dice-rolling and one picking up cheese slices - you decide when to stop, which you should, before the cat catches your mouse. Simple, a nice one for the kids :) risk management, counting. My only complaint is that you didn't really have to think much so play the game - but that's just me, I like "thinking games" but I know of lotsa people who like games which you didn't have to think too much.

In any case, looks like this game is out of print. Thus, I'm glad I got hold of it when I did :)

I enjoyed the game quite a bit, actually, despite it being quite "non-thinking" in nature. I was also glad to note that Isaac did not make a fuss when he had to lose his cheeses when the cat caught up with his mouse. He was very calm about losing his cheeses, but thereafter, he kept a close eye on my turns - to make sure that I would lose MY cheeses when the cat catches up with my mouse! Hahaha! This is definitely good progress for Isaac has always been a very competitive boy, and quite a sore loser ;p

Backpost is about a game too! Viva Topo with Isaac! :) That's a much longer post - enjoy!!!