Isaac birthday 6th August fell on a Saturday this year, so we celebrated on 5th August, a Friday. We did a simple one, just a Thomas cake and party hats. But thankfully, at this age, that's enough to make them happy. 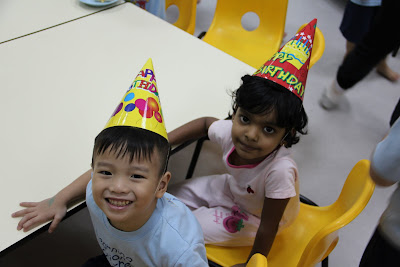 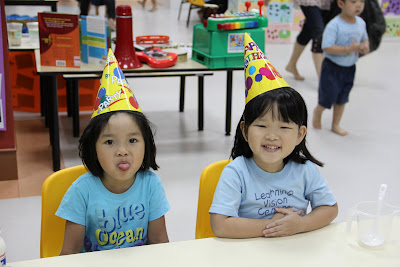 Above, Isaac and Neha. And Alycia and Macy :) This is also the first year that Isaac would have his brother and sister celebrate his birthday with him in school. 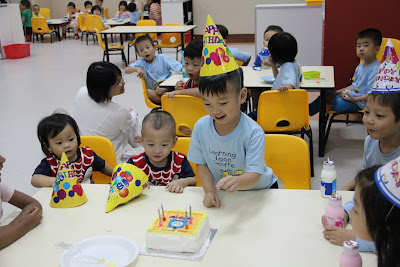 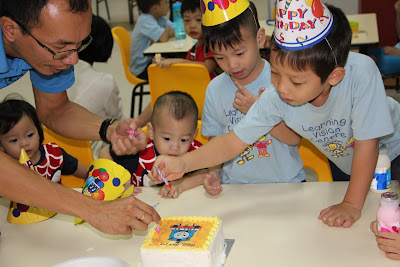 We managed to get Asher to sit with Isaac for the photo, but not Shawna. Being their first week in school, Shawna was still rather sticky to us, when we're around in school. 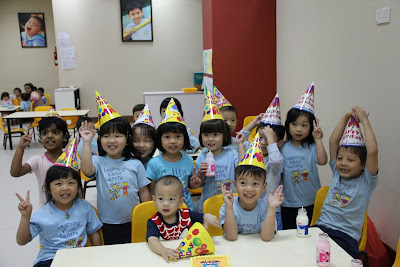 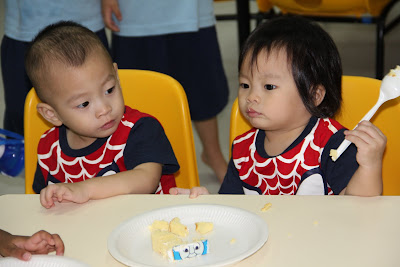 The kids lapped up the entire cake! Most of the girls had seconds, and so did some of the boys. Isaac was so slow in eating (as he usually does, says Teacher Lina) that he did not eat fast enough for seconds - coz everyone else ate up the extra cake before Isaac said he wanted another piece! :p 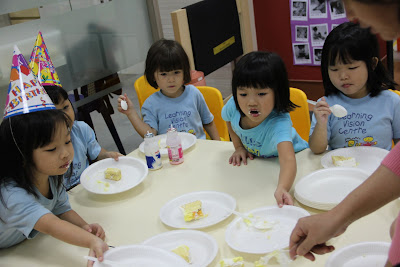 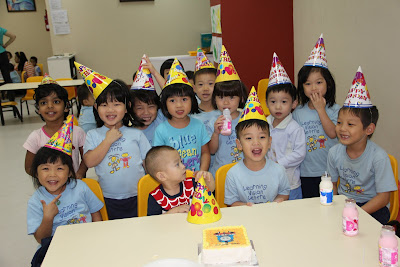 We decided not to give a goodie bag this year - the hassle of putting together a bag was a headache. Perhaps I had too many "prerequisites/qualifiers" - I refused to give candy nor silly toys, so that kinda ruled out a lot of stuff. hahaha... Apparently, we weren't the only parents who found that a hassle - this year, most of the parents gave other stuff. One parent just ordered a Macs Happy Meal for each kid - so each kid had the Happy Meal toy. Another parent just gave a Pooh & Friends ornament thingy - different kids had a different character (Isaac's was Tigger!). 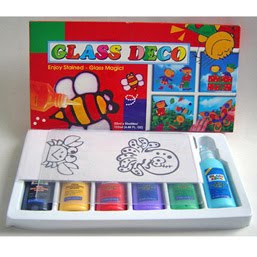 For us, we managed to find this kit, that can be used to make window decals kinda stuff. Unfortunately, we didn't get the chance to test it out though. The idea behind this was great, we thought. But the paint's kinda overly water, and not thick enough. As such, the decal thingy's really thin, and it was hard to do a nice design in the first place coz the paint was too runny.

But the kids loved it - well, at least, Becca, Isabelle, Natalie and Isaac loved it. (Yeah, we got extra sets to give them to the girls too). They liked doing the craft work. Pity the quality of the set wasn't better - yes, another made-in-china product. Ah well, now we know we better test stuff out in advance! :) But hope the rest of Isaac's classmates had fun with the kit! :)