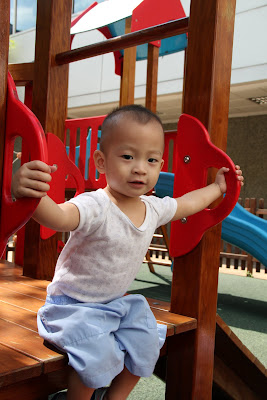 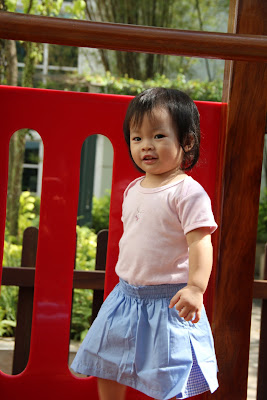 Given Isaac's positive experience in childcare, my original intention was to send the twins into childcare soon after they hit 18th months. However, 3 kids in an above average childcare is no small strain on the pocket, even after Government subsidy of $300 per kid - in fact, the childcare charges $1,000 per kid per month, so 3 kids is a minimum of S$2,100 total, after subsidy, but before extra lessons (like Isaac's Science lesson and Music lesson). Anywayz, seriously no joke - so hubbs thought of waiting till end of this year before sending them in. However, turns out that we had to send them in earlier... So, it came to be that, on 1st August 2011, the twins started childcare. They are 5 days shy of being 19 months old. 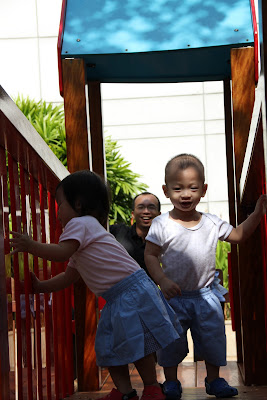 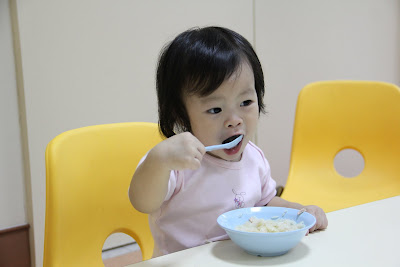 It's the school policy that for new students, the parent can spend the first three half days with them, but thereafter, they want you to leave the kids there. On the 1st day, hubbs had to work, so I had our helper come with us. So I didn't take pix, thinking I had another 2 days to do it. On the 2nd day, hubbs insisted that we leave them with the teachers while we went out for morning coffee at the cafe. And on the 3rd day - hubbs told me to go to work! *sob*sob* Yes, I'm trying to explain why I have so few pix of their first three days in school!!! hummphh! 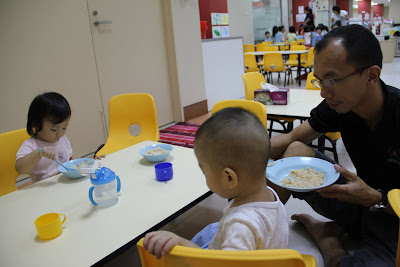 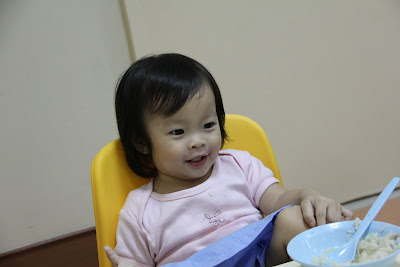 Generally, the twins are coping well. I think it helps a lot that Isaac is around. It seems that Isaac would often pop by the twins' classroom to check on the kids. And Shawna would also ask for him pretty often. Shawna is very happy with the food, and tends to finish her meals. She would even feed herself. On the other hand, Asher doesn't seem to be taking to the food well, and tends to rely on his powder milk for main sustenance.

Hubbs is usually the one who drives them to school, and picks them up from school. He says that Shawna would usually be the one who instinctively know that he's about to leave, and she would hang on to him crying. Asher, for the most part would be happily wandering off to play already. Our guess is that Shawna, being a little more 'developed' than Asher, is more aware of what is happening, and hence is more sensitive. However, hubbs says that lately, Asher has learnt as well, and occasionally cries when he leaves. However, as of now, the end of their first month, they seem to be settling very well. 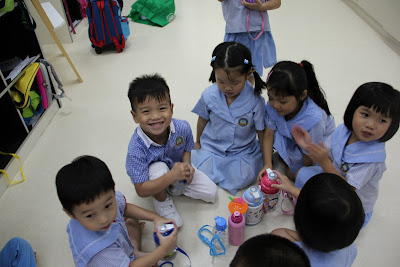 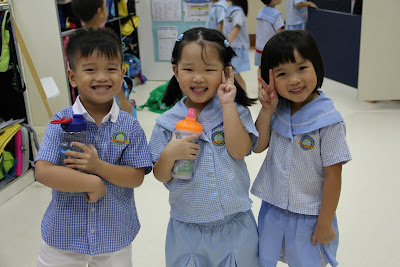 And here is Kor Kor Isaac and his N2 Flying Fish friends! Look how much they've grown since the time Isaac joined the childcare in March 2010. Isaac enjoys having his brother and sister at school with him, and he's been taking pretty good care of them. 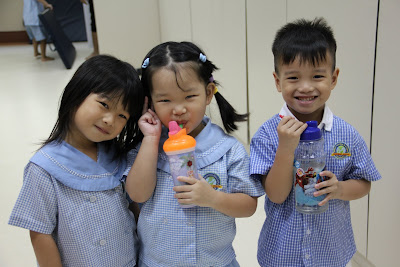 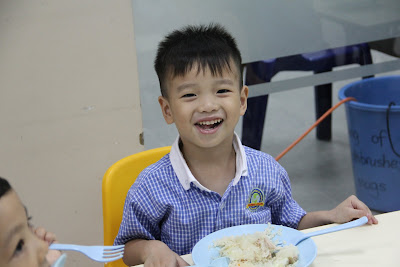 In fact, I have noticed, that since the twins started childcare, the three kids seem to be closer. They'd play together more now than before. And their favourite form of playing together is to fall on each other and "tackle" each other. They also love to hug and kiss each other. I mean, don't get me wrong, they still fight and snatch and all that, but I do find that they're also more loving to each other. Look at this picture below taken on the evening of 4th August after school one night - Asher was just lying on Isaac and they were both watching tv, waiting for their dinner to be ready. So sweet, right!? :) 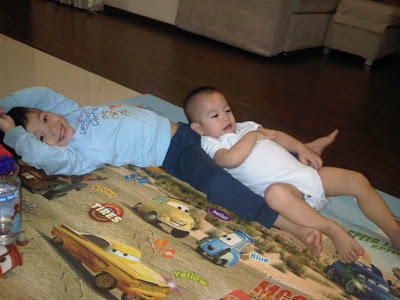 Let's hope Isaac keeps up being a good Kor Kor! :)