Nice socks, or not?!

I posted this picture below on my Facebook wall yesterday, and generated quite a few comments on it.

Here's my comment that went with this pic post:"For the record, I wanted him to wear white ankle socks (or at least any other coloured ankle socks!) but he thinks his socks are very matching and he refused to change coz he says I'd not be seen with him today anyway. *faintz*" 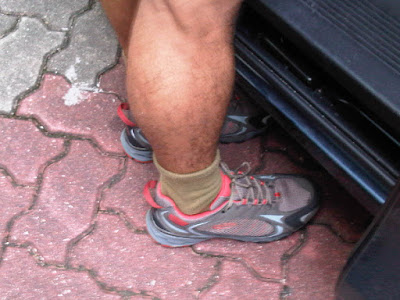 It was hilarious - look at the reaction I got: -

Foo Sock Peng, Wu Yuping and 2 others (Nicholas Loe & Pamela Gordon) like this.
And hubbs shows that he loves me when he changes his socks if I ask him to, coz he'd be out with me (and seen with me) hehehehhee...
Do a Dobby!!! Show your love with socks!!! Hahahhahahahahaha...
3 hours ago · 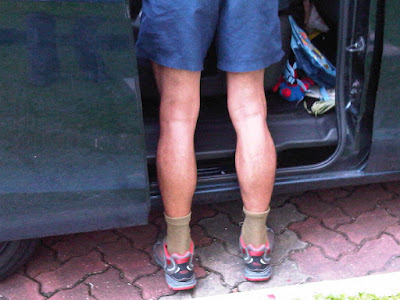 Hubbs only realised last night that I'd posted the picture of his socks, even though I'd tagged him in the post. He said:"You should have posted a full picture of me, then they can all see how it matches." I replied:"That's not the point - it doesn't matter if you were wearing shorts, coz you're still not supposed to go out wearing shorts or berms with socks like that?!" hahahhaa...

We both had a good laugh. I knew he'd find it funny, that's why I posted it :) It's hilarious, it is! And it is soooo him. And for people who know him personally, they'd know what I mean. This is part of hubbs' charm. The "uncle" charm. hahahhaa...

The thing is, the socks do (sorta) match the shoes (which is why hubbs keeps on insisting that it DOES match), but to us women, we feel that it doesn't "match" the rest of the get-up. Like, he should be wearing sports socks - be it ankle whites, long whites (then look like school boy, or tennis player? hahaha), or coloured ankle socks at the very least. But then again, at least he's not wearing black business socks ;p (That's not to say he didn't try that before - yes, he did change out of those when I asked him to.)

We had a new colleague in office recently, who'd just relocated to Singapore to work. He was a bachelor, living by himself here. Recently, we started noticing that he'd come to office with his clothes un-ironed. But the clincher was when he recently appeared with his pants cut off at the ankles - yes! instead of having it shortened and properly hemmed - he'd simply used a scissors to cut off the excess length! The ladies in office were all horrified, but we made excuses for him amongst ourselves by saying that he was a foreigner here all alone.

Then a colleague of mine said:"No lah, he not married lah. If he has a wife, she'd not let him out of the house dressed like that. Coz I will not let my husband out of the house wearing his pants like that." Everyone laughed, and nodded. Being all either married, or attached or soon-to-be-married - we could all identify with that statement.

Somehow that statement stuck in my head and I kept thinking about it. It is very true to a large extent. And when this socks conundrum came up, I was reminded of this statement. So when, hubbs protested me asking him to change out of his socks by saying:"But you won't be out with me today - so nevermind lah!"The first thing that crossed my mind was:"But how can I let you out of the house like that?!" :p

But I think I can. I think, and I realise, and I know, that I love him enough to give him that bit of choice and freedom to dress that way and make a little fashion faux pas, if he so wishes. Similarly, I appreciate it that he does change out of his socks if and when I ask him to on the days when we are out together.

So, yes, for better or worse, in sickness and in health, for richer or poorer, nice socks or not, till the end of time. I love you hubbs!!! :)
Posted by Pamela at 12:10