HELLO!!! :) Happy New Year everyone!!! :) You know, the BackStreet Boys? We're Tan Family Chronicles - the Back-Post Blog kekeke... Yes, I know I'm like an entire year behind in my blogging pictures-wise. But still, I refuse to skip a whole year, and I will attempt to do some concurrent blogging. Yes, I invented that phrase "concurrent blogging" - it means that I will post 2011 and 2012 concurrently! (Brilliant! ain't I?!)

So, say in January this year, you'd see Jan 2011 posts as well as Jan 2012 - though of course, the 2011 posts will be backdated to Jan 2011 - so you'd just see a post with the links. This will facilitate my Blog2Print printing you see. Thus as you might be able to guess... my new resolution this year is to get up to date with my posting!!! woooohooooo!!! (Hey! Stop all your "yeaaaah, riiight, Pam."s Think I can't hear/see you issit... *evil*eye*)

To start of the new year, we have this lovely pictures of Shawna which I took with my phone on 2nd January 2012 :) She's really such a cutie-pie... when she ain't a chili-padi :p We'd brought the kids down to the coffeeshop a few blocks away, for breakfast. The cleaner lady recognises us already. She literally seen us grow up - from when we were just married, to having Isaac, the twins, and now the kids are all so big. 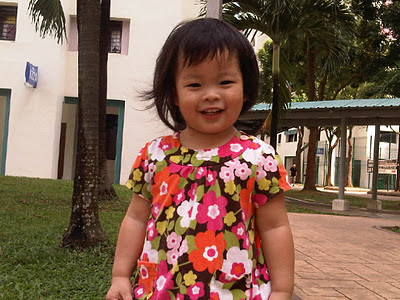 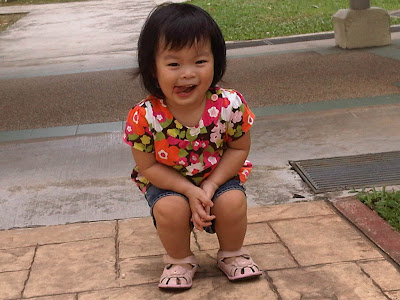 We used to be quite pally with an indian cleaner there, think he was a foreign worker - we aren't sure, coz we don't really talk to each other. But lotsa smiles around (and hubbs calling him "brudder!"), he's always very helpful finding us a baby chair, cleaning the table etc. When hubbs was trying to clear his closet, we brought down to our friend the pants and shirts which was still in very good condition. Sadly, he has since stopped working at the coffee shop, and we don't know where he's gone to. Hope he's doing well. Ah, reminiscing mood I'm in. Must be coz of the new year... :) 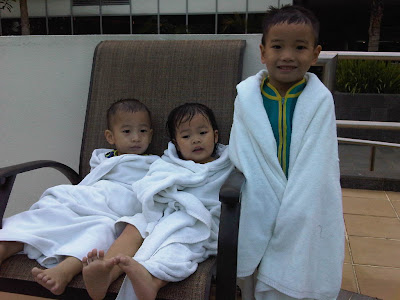 We brought the kids swimming at the NUS Guild House at Kent Ridge too, coz Isaac has been asking to go swimming coz he hasn't been almost all of December, since it was always rainy or (we felt) too cold to swim. Though, by the time we took the kids outta the pool, the grey clouds were gathering too. We didn't want the kids to swim when we felt it got too cold, coz we didn't want them to fall sick. The kidzes and I have been prone to falling sick in 2011. Let's hope 2012 onwards would be much better for us! :)
Posted by Pamela at 01:23