Rockclimbing is more brain than brawn!

Below is our Isaac, trying to climb the wall. A half meter higher (than in the picture) is about as far as he got that day. It was his third time climbing a wall. He tried a few times on Sunday, but I don't think he made it to the top. We tried to console ourselves that "he's inexperienced" and "he's just a little boy". But our friends,  Chan Peng and Xiaofeng's sons, just put that theory to rest. 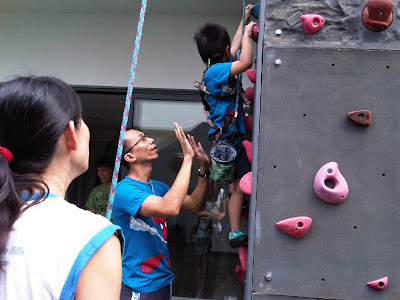 The boy above in red is Yu, he is 4 years old this year. And Sunday was his first time climbing a rockclimbing wall. And look, he made it to the top! Below, the boy in white, is Yu's older brother - Hay, who is 6 years old this year. Also his first time climbing, and he managed to scale the entire wall too. As you can see, these boys aren't exactly mini Ironmans or anything like that. Yu is average in size, and Hay is one of the scrawniest 6 year old boys I have ever seen, and yet, they could do it. They scaled the wall.
We realised that rockclimbing is, in a way, more brain than brawn. All things being equal, having the right attitude is more important than having more muscles. Hay & Yu persevered, and kept trying, and they managed to scale the wall.

Isaac, on the other hand, kept saying things like "I cannot do it." "I can't I can't", and gave up a bit too easily. Looking back, I wasn't surprised, as Isaac is the type that has to have a lot of early success in order to bolster his confidence into persevering and doing well. This extends to other parts of his life. Just that it is in this instance, that it brought this aspect out so starkly.

Discussing this with hubbs, it triggered another discussion on an issue which was lingering at the back of our minds. Isaac starts primary school in 2 years time, you see. And hubbs being a Catholic High School (Pri & Sec) alumni, Isaac would have priority to get into Catholic High Primary School. Our problem is that it's sooooo far from where we are currently staying, so we are thinking twice about sending Isaac there. It seems a fightful waste not to send him to such a good school though.

But now, this discussion triggered a thought. Isaac is a very bright boy and from what we can see, he is above average amongst his peers. But, given his character, perhaps Isaac would fare better if he were placed in an average school where he is amongst the top-performers; rather than go to a good school like Catholic High, and he average there. Hmmmm... food for thought... we have one year to decide where to register him for...

Note: Photo-collages were used with approval. They first appeared at the Chans' blog here!
Posted by Pamela at 19:13