The story of the double stroller

I don't think I've told you about the story of the double stroller. Yes, this double stroller in the pictures. It's a MacLaren twin stroller. I'm not sure how much it costs but I'd bet it's more than a couple hundred dollars. Even though we have three kids, we've been so blessed that we didn't have to spend a single cent on a stroller. With Isaac, we received two strollers, one Peg Perego from the Chanders, my cousins. And a second one, a Combi, from my ex-colleague Faith Soh. Both strollers were used by the families who gifted them to us, but we didn't mind - and the strollers were in great condition anyway. In fact, we're still using them! 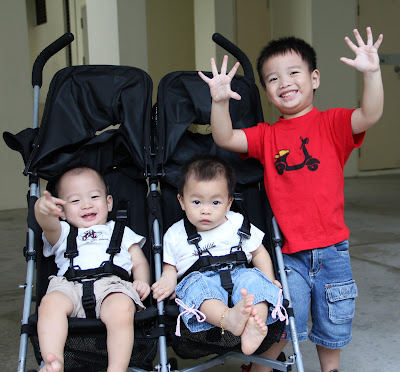 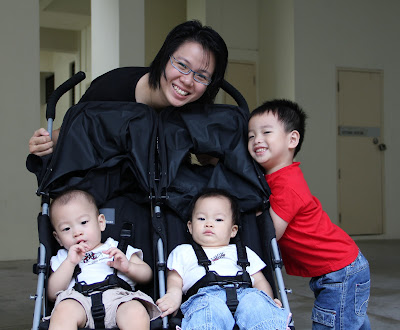 When we were pregnant with the twins, hubbs and I discussed about whether we should get a twin stroller. We decided against it, primarily coz our house is already filled to the brim with all assortment of "baby stuff", ya know - strollers, walker, high chair, cot, play pen, toys etc... Also, we wanted to save money, and we figured that technically, we already have 2 strollers, so we didn't really need another one. We figured we'd buy a Buddy Board to attach to the Peg Perego for Isaac. The Buddy Board was basically a board with two wheels below, that can be attached behind any stroller, for toddlers to stand on.

When the babies came, we were kinda glad we didn't buy the twin stroller, coz most of the time, the babies didn't want to be in the stroller. Or, well, not both at the same time! In fact, we found that bringing out two strollers would often give us too much to handle if one or both of the babies refused to stay in it. Thus, most of the time, we only brought one stroller out, so that there was always "spare capacity" to carry the babies, if both needed to be carried. 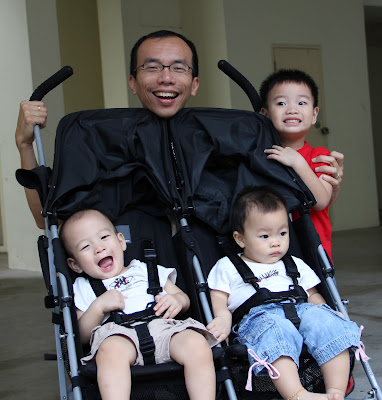 Then one day, when we were attending mass in church, this lady tapped my shoulder and whispered in my ear "Do you have twins?" I, out of reflex, glanced at Asher & Shawna, then looked at the lady and replied "Yes, I do." Her face lit up with a smile that her suspicion was confirmed and she quickly said "Do you want a twin stroller?" I gasped "Yes, I want!" a wide grin across my face.

Apparently, Ivy has 4 sons (yes, four!!!), none are twins, but the boys' age gap was pretty close so she'd bought a twin stroller some years back. She didn't need the stroller anymore and was trying to find someone to pass it off to. I tried asking her to sell it to me instead, but she wouldn't hear of it and told me that she was just glad to find someone who would make good use of it. I thanked her as best I knew how - I gave her some of the brand new boardgames that I was selling in my online shop. I hope the boys enjoyed the games!

We were very thankful to Ivy and her family, and to God, for the stroller. Ask and you shall be given! We're very blessed, indeed! :)
Posted by Pamela at 16:13