That's Isaac, our biker dude :p You know how they say that the kids model after us parents? Well, I think we deliberately as well as unconsciously push the kids in the same directions as we do. It's only logical really. It happens unconsciously when we exhibit preferences and the kids pick up on that. We deliberately do it when we expose the kids to things and activities that we like. And cycling is one of these activities.

I'd always loved to cycle, from when I was a kid. I would meet up with my primary school friend Shuwen, who stayed in the same block as me, and we would often cycle to our central where we went straight for the 7-eleven there to get our weekly fix of Mr Softee ice-cream. When I was older, I asked for a mountain bike as my birthday present and started to cycle around on it. I remember how during the school holidays when I was secondary school, how I cycled all the way from Upper Bukit Timah to Tanglin Road on a mountain bike, with a friend on my back seat! And the other time during my junior college days when me and friends would cycle all the way to Geylang just to have supper (beef horfun and beancurd!!!).

Hubbs is very much into cycling these days. He has a road bike which we bought in Austin, Texas, USA - read about that here! He really started heavy duty cycling when he couldn't run long distance anymore coz his meniscus is torn. His dream is for all of us to cycle as a family, to go places together. I would love for that to happen too! I can't wait to be able to cycle long distance with the kids so that I can use it as a form of exercise. Exercise that wouldn't take me away from the kids coz we'd all be in it together.


So when we found this balance bike, we were ecstatic. It was supposed to be the most natural way for a young child to learn how to ride a bicycle - you learn to balance first. So this bicycle doesn't have any pedals. You just sit on the seat, and use your feet to propel yourself forward. And at any point in time, if you feel like you're about to fall, your legs instinctively come down. Easy peasy! Look at this video above, taken in February 2011, barely weeks after Isaac got his balance bike. 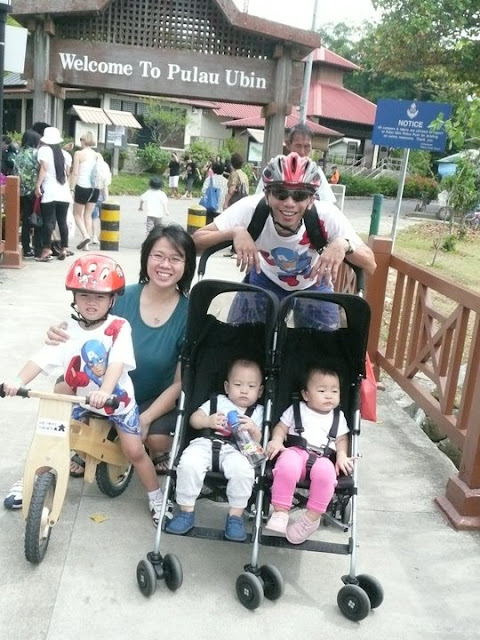 In fact, Isaac got so confident on his balance bike, that we didn't have any qualms about bringing him to Pulau Ubin to cycle with his balance bike. It was a Sunday in March 2011 when we decided to go Pulau Ubin on an adventure. Alright, I confess, hubbs had to work - he had to go look in on his NCDCC cadets who were having a camp at the NPCC camp on Pulau Ubin. So we decided to all go, instead of hubbs sacrificing his time away from us and going on his own. Upped and go, we did!

We rented two bikes. A single mountain bike with a childseat for Asher in front of me. And a double bike for hubbs to ride in front, and our helper Lina, coz we found out that day that she didn't know how to cycle. Shawna was on a childseat at the back of the double bike. I tried riding the double bike, but I couldn't control it due to the weight. And our star for the day, Isaac, was on his balance bike. And with his balance bike, Isaac rode in Pulau Ubin! :) If the slopes were too steep, we got down to push. But Isaac handled the bike very well, and we taught him how to control his speed by using his shoes as brakes. Very well done, Isaac! :)
Fast forward a year, and we have here below in March 2012, Isaac on his balance bike and Shawna on her push car. Isaac is very proficient on his balance bike and has started to experiment with many twists and turns. Some people make the comment that it looks like a very tiring bicycle to cycle because there are no pedals. But I don't think it is so. In fact, it looks like it's so much fun! We've had some adults who stopped us and asked whether they have such bicycles made for adults! I wish they did, I would like to get one, just for fun! But seriously, it'd be a great training tool to teach adults how to cycle too - for those that still don't know how to, that is!
Catch Isaac in action in early January 2012 on his balance bike! Can't wait for the twins to start cycling the balance bike! We lowered the height of the seat to the lowest it'd go, but the twins weren't tall enough for it yet. So our balance bike is currently on loan to Regina! Can't wait to see her in action on the bike! :)

Then on day in early May, my ex-colleague Cindy whatsapped me to ask if we wanted her son Jayden's old bike as the 9 year old boy had outgrown it. I thought it'd be perfect for Isaac as I felt that he was ready to transit to a bicycle with pedals. He was already on the second highest position that we could increase the height of his balance bike to, so technically, he could probably stay on it for a good 6 more months or more. But I was keen to start the twins on the balance bike really; so Cindy's offer came at a good time. We picked it up, pumped up the tires, and Isaac had a go at it the very next day. And just as we expected - he did it! He could ride the bike with the pedals, two-wheels - without the silly balance wheels that stick out at the sides. yay!!! 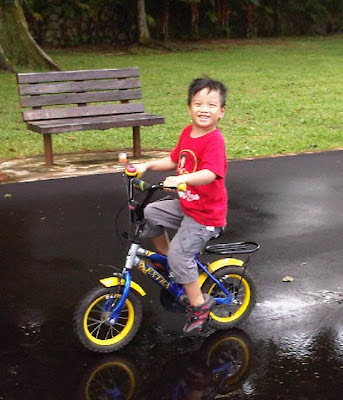 Look at Isaac go!!! The video below was taken after Isaac started cycling his pedal bike for about 10 minutes :) He'd gotten the hang of the bike very quickly. Good job, Isaac!!!

We're so very very pleased, because this means we're one step closer to being able to cycle out together! In fact, we can, because, we just have to place the twins on a childseat each on a bike hubbs and I cycle - the places we'd go!!! kekeke... stay tuned for more of our adventures in cycling!!!