Remember this post on rock climbing that I wrote earlier this year? Isaac couldn't climb up at all. That wasn't my worry. My worry was that he seemed to have a defeatist attitude and did not want to try very hard at all - coz he thought he couldn't do it.

However, recently, we went back to climb again. This time, we brought my nieces along, three of them. Natalie, Isabelle and Rebecca. We wanted to expose them and let them try rock climbing. 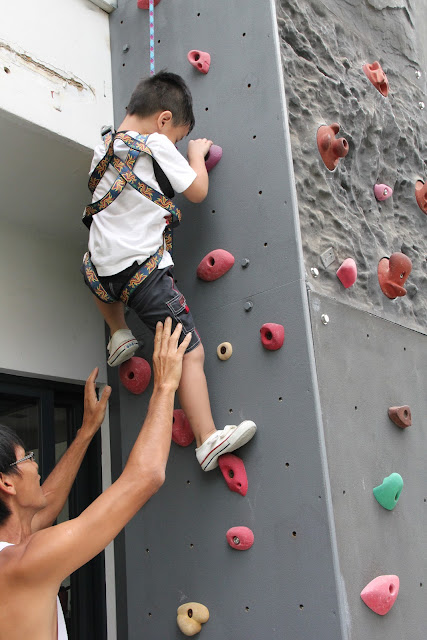 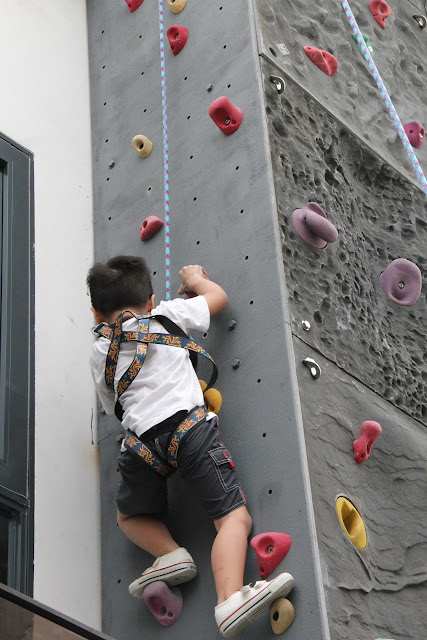 We wondered if Isaac will behave like he did when he climbed the last time - not trying hard thinking he couldn't do it. We needn't have worried, he had a total change in attitude! The moment we got there, he strode out to the wall and said:"Me, me, I want to climb!" We gamely allowed him to go first. This was the first time the girls have seen a rock wall and so they were probably felt a little intimidated, looking up at it. Not surprisingly, no one challenged Isaac's claim to be the first to climb.

And climb he did! He scooted up the wall pretty quickly, stopping occasionally (like four times across his climb) to exclaim:"Mummy!!! Look!!! I can climb higher than I thought I could!!!" Yes, he repeated that last sentence no less than four time, in this first climb. He was ecstatic. Everytime he paused climbing to blurt that out, he grinned from ear to ear like a Cheshire cat. 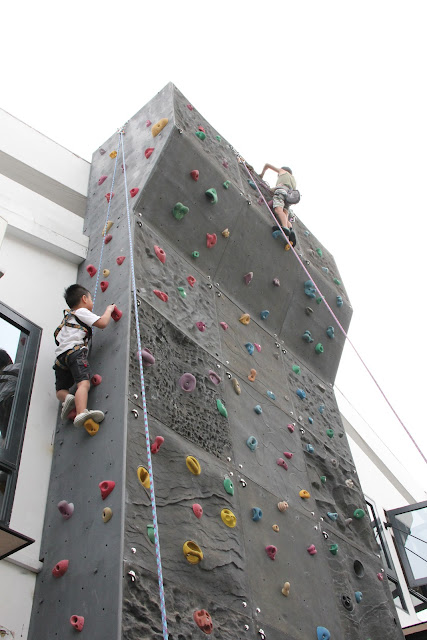 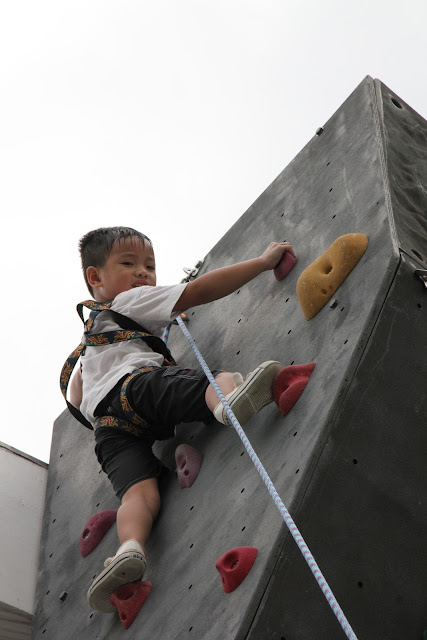 We were very pleased with Isaac. This was an excellent first climb. No moaning, no groaning, and no "I cannot do this!!!"s. Fantastic! We're guessing it's the presence of his cousins that fueled him to put forth this astounding performance. So it seems, that positive peer pressure works wonders on Isaac. Things that make me go hmmmm... 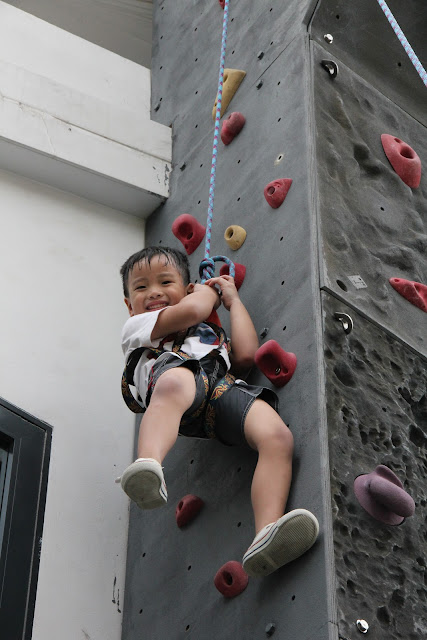 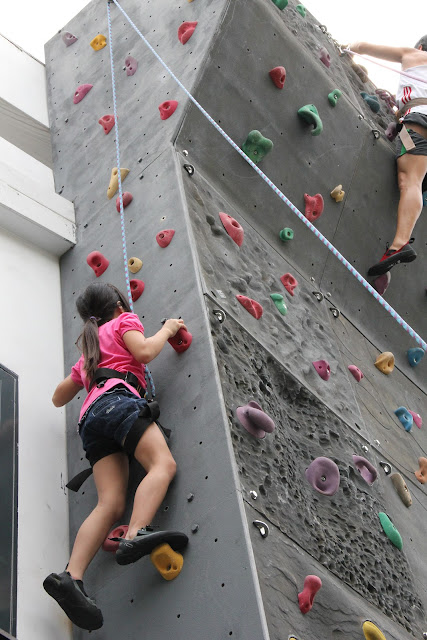 Next was Isabelle, who just turned 7 this year. Ever since she was young, we pegged her for being a natural at rock-climbing. And she was! This is the simplest route on the wall, so she made it up in a jiffy. This wall ain't as simple as it looks - I should know, coz I climbed it. However, coz I climbed it after the kids did, I had put myself under a bit of stress. Everytime I hit a rough patch, I'd mutter to myself:"If the kids can do this, so can I!!! Just do it! Don't malu!!!" Luckily... I did! I managed to climb to the top of this route too. Phew!!! 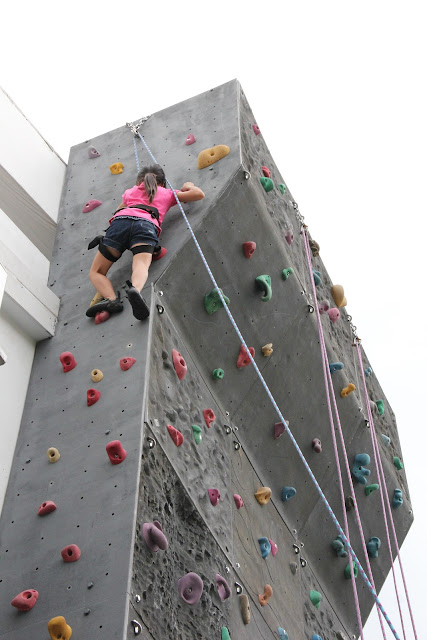 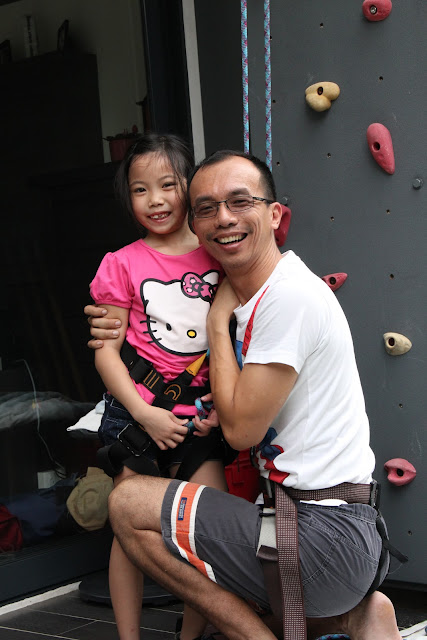 No sweat! Isabelle came down, all smiles too.Isabelle, if you noticed, is wearing a proper adult sized harness - probably XS in size. The harness is fully adjustable anyway, so it can always be tightened to a snug fit. Below, is Chan Peng putting on the kids' full-body harness (same as the one Isaac wore) for Yu, his 4 year old son. Yu has already quite a few complete climbs under his belt. He is one steady climber. 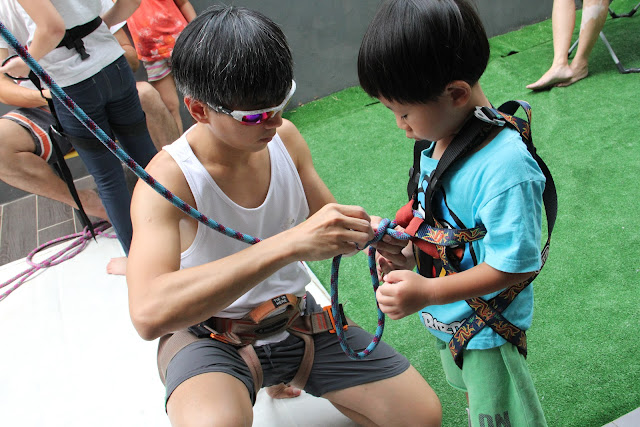 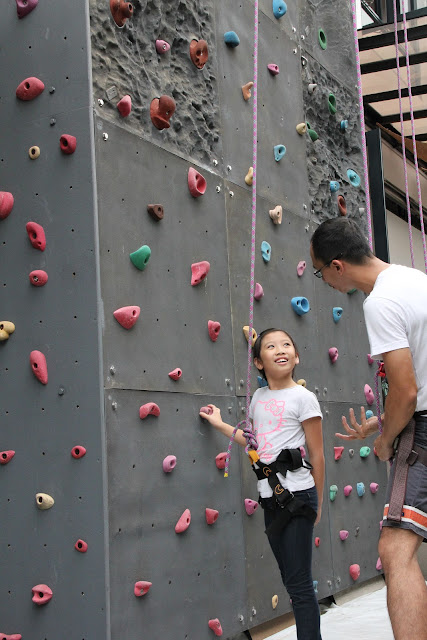 While Yu gets strapped up and on his way, Rebecca is getting a safety briefing from hubbs. He was teaching them basic climbing safety protocol. For example, if you are the Climber and intend to start climbing, do signal this to your Belayer by calling out "Climbing!" and make sure your Belayer acknowledges this, usually, by saying "Climb on!" This is to ensure that your Belayer is aware you are climbing. For if the Climber climbs up the wall while the Belayer is distracted and not aware that he has commenced climbing, the rope will not be tightened and this would be dangerous if the Climber goes up quite high and falls. This is unlikely as most belayers will pay lots of attention to the climber once they are all hooked up onto the rope. But it is not impossible and it is always good to have proper climbing ettiquette, and err on the side of caution. 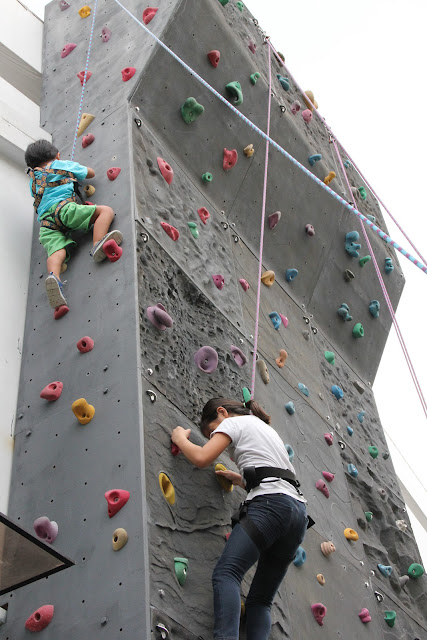 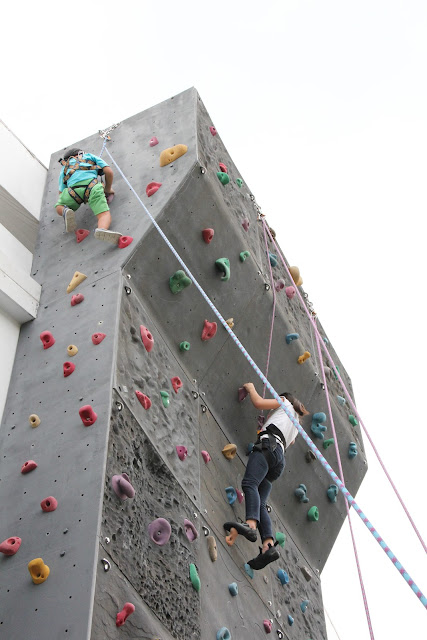 Look at them go! Isn't it amazing! Below, Rebecca has already reached the overhang portion. She tried a few times but couldn't conquer the overhang. But what is important is that she tried. Later in the afternoon, after lunch, she tried this route again, and still didn't manage to clear it. I had to send her for an enrichment class she had, so she didn't manage to have time to try it again.

Isabelle did though. Heard that while I had sent Rebecca off to class, Isabelle tried the wall with the overhang route and managed to clear it and reach the top, after a few tries! :) Good job, Izzy!!! :) I didn't get to try this route that day, but the previous time we came climbing, I couldn't clear the overhang on this route either. It really isn't easy at all! 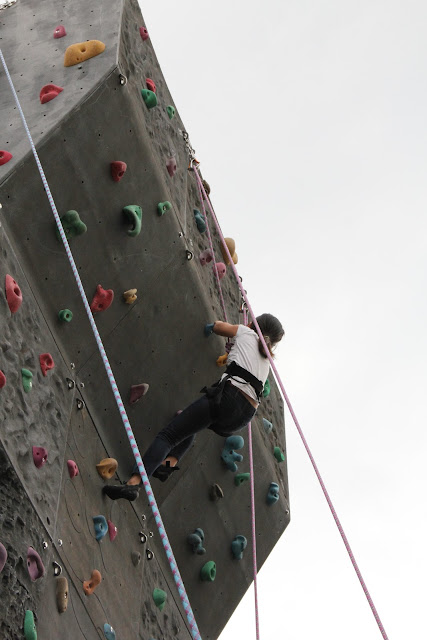 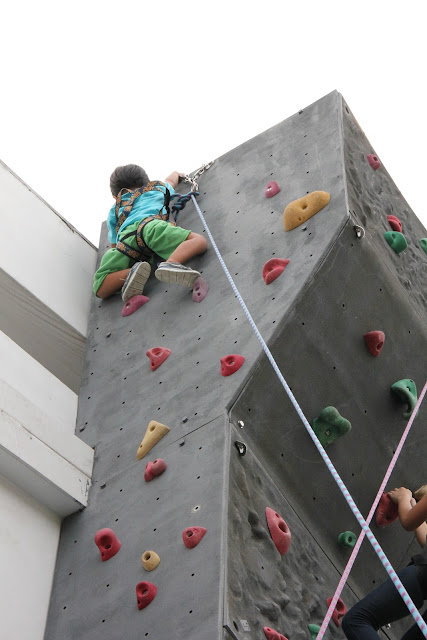 I was trying to rationalise away why Isabelle could clear the overhang but I couldn't. "Must be my humongous butt. Too much dead weight. SIGH."  hehehe... This is partially true, I think. But then my body is much longer than the kids' bodies - just look at this picture above of Yu and the wall. Some of the bits were half his body height!

Natalie declined to climb. We didn't push her to do so. We'd let it slide this time. But next time round, we'd definitely get her to try. 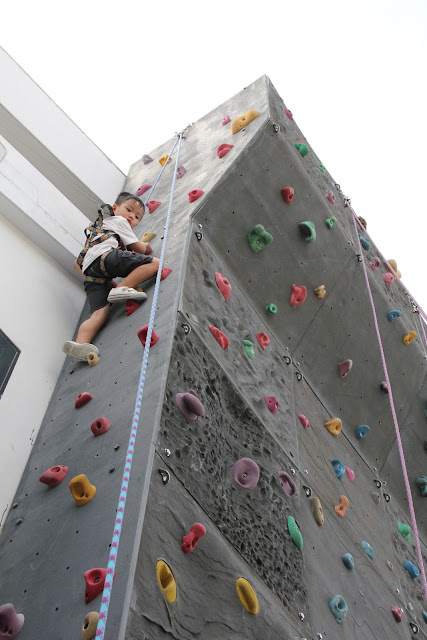 Isaac's second climb. And he was a lot faster this time too! He was still as amazed, though he only said twice "I can climb higher than I thought I could!!!" He was buoyed with confidence after his first climb, and thus he completed the second climb without any problem at all. Next time round, we'd let him have a go at the overhang routes! 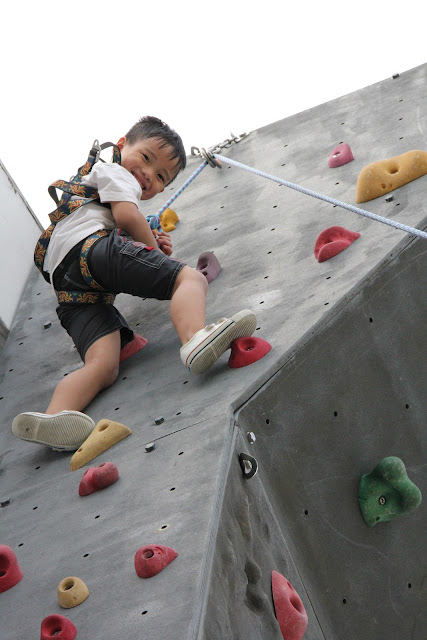 Happy hubbs. Rock climbing is to him what boardgaming is to me. It's the activity of choice that he'd love for his children to be engaged in with him. And it's starting to happen. Happiness, somebody! Climb on!!!
Posted by Pamela at 18:32