A robot we made 2 years ago

Two years ago, when Isaac just joined childcare for not long, the school asked us to help Isaac (together with him, that is) construct a robot out of recycled materials. It was meant to be a project with parent/child involvment. I mentioned this here before, but thought I wanted to talk more about the construction of the robot, so here I am.

As you can see, the robot is quite big. It's quite tall and can stand on it's own two feet quite well. That's because I weighted down its' feet with water. Its feet is actually two plastic bottles that previously held rolls of wet tissue. I wrapped up some tap water in some plastic bags and placed a bag each in each "leg" - so with the weight, the robot was very steady.

The purple detergent bottle that I split down oneside for the torso was the hardest to cut apart. I used a penknife to do it. Not easy though, coz the plastic was quite thick and tough.  But I like the effect. Behind his chest are two 2 litre bottles that used to hold Meiji Fresh Milk. I liken them to being the robot's lungs! kekeke...

If I recall correctly, I used old newspaper, rolled up, to use as the robot's skeleton, namely, his spine, neck and legs. So they'd hold the different parts of the robot together. The arms are made up of plastic bottles as you can see. Can you see the elbow joint? I simply cut a hole in the (upper?)arm and stick the forearm in. And I used ribbons to join the (upper)arm to the torso, so it's movable!!! So cool right?! How can you make a robot without any movable parts, right?! 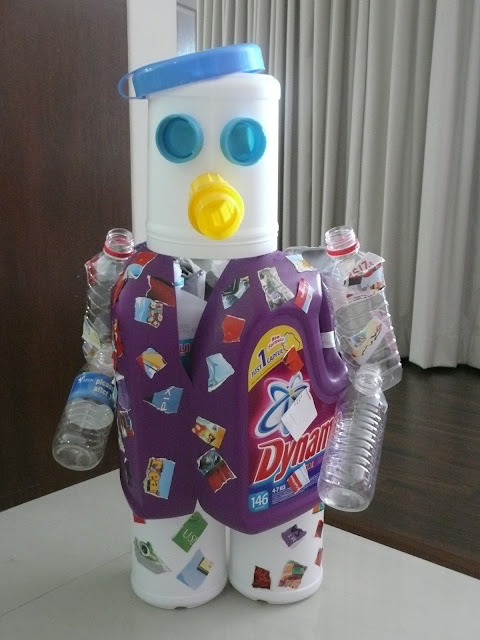 I was so excited about building this robot that I practically built the whole thing myself. Isaac did help me paste all the papers on the robot though. I wanted him to cover the whole surface but he kinda got bored and said he was done. sighz. But we had loadsa fun doing this! Well, at least I did! :)

Labels: We Built This City