Ever since I was young (like 15 years old) I knew that I'd have at least three children. I'd always loved kids, and I loved the idea of having my own kids, of being a mother myself. So from a young age, I would imagine how I would and should behave when I am a mother. What I'd say to my kids, how I would say it, the way I'd behave with my kids, things we'd do together. Anything and everything. Friends comment that I "think too much" but I like to think that I'm simply "getting prepared" for "when the time comes".

I am a subscriber of a number of theories. Firstly, kids emulate their parents. Thus it is important to walk the talk and behave the way you want your child to behave. This includes saying "please, thank you, you're welcome" - the whole gamut. Hubbs and I are conscious to always say please, thank you and you're welcome when we talk to the kids themselves, and also to our helper, and anybody else. When the kids forget, we'd also ask them to say it. It is tedious, yes, but it is necessary - due to the theory of "kids emulate their parents". If we want the kids to do it, we have to do it too. And if they forget, we must also conscientiously request that they say it, even if it means they have to repeat after us. Again, tedious but necessary.

Secondly, I believe in positive reinforcement of good behaviour. Meaning, I praise a lot. And I mean a lot. When the kids do something well, or something positive, I will make sure I single it out to praise. I'd say things like "Isaac, thank you for not throwing a tantrum even though Shawna snatched the toy from you. She is wrong to snatch, but you were understanding and you did not scream at her and you did not snatch back the toy. I saw that you let her have the toy, thank you so much for sharing. You're a very good kor kor (older brother)." and only after I say this to Isaac, do I turn to Shawna to discipline her for snatching. Isaac went through a phase where he would have thrown a tantrum, or screamed and snatched back from Shawna - this is why I am keen to single out that I am aware he did not exhibit any negative behaviour - and praised him for it. Most children are simply attention seeking. Hence, doing this will encourage them to exhibit positive behaviour to elicit praise, hugs and smiles - i.e. the attention they seek - rather than exhibit negative behaviour in a bid to trigger a reaction from the adults. 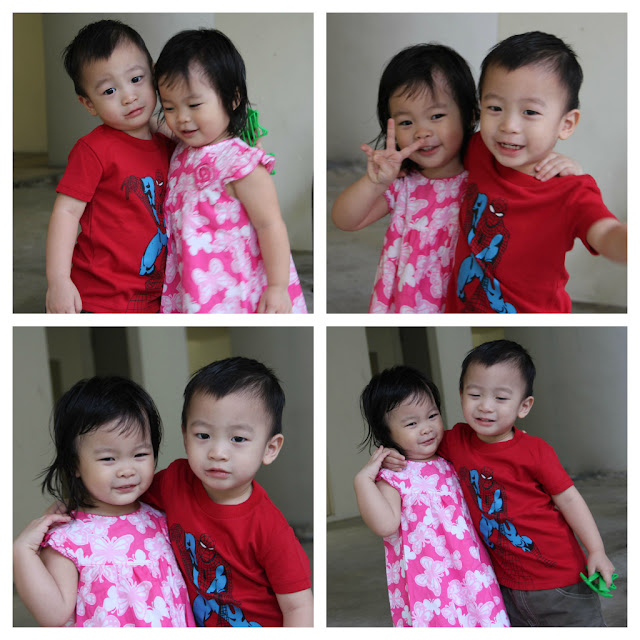 I have my justifications and reasons to my theories - but they were, at the time before I had kids, just theories. I felt, and hope, that it'd work. But who knows if it'd work until it does? Well, I am pleased to report that I can already see it working on my kids. To illustrate this, I shall relate what happened this morning...

You know those small little super-bouncy balls? I have an entire collection of them from when I was young. I don't know how many, at least 200 balls, I should think. So, the kids love to play with them too. I'd usually give them one each to hold. They can't do the bounce-catch yet, but you know how kids love to have a toy to hold on to. So, this morning, Shawna pointed at a container that she knew our helper had kept the balls in, and said "Mummy, can I have a ball please?" So I gave her one, she asked for another (so she had two), and Asher asked for the small orange ball, and Isaac asked for one. We went down to the car, piled in, and off I drove, today I brought them to the childcare centre as hubbs was off cycling. So... we were in the car, on the highway, when...

Asher:"Oooops... Mummy, I drop orange ball!"
Me:"You dropped your orange ball? Oh dear. Mummy is driving, so I'd have to pick it later, alright?"
Asher:"Alright."
Shawna:"Shawna give you ball, Asher?"
Asher:"NOOOOOO!!!!!!" (he shouted)
Me:"Shawna, thank you for offering Asher one of the balls you're holding. That's very nice of you to share with Asher."
Me:"Asher, Shawna is being nice, to want to pass you a ball. If you don't want it, just say "No, thank you." You don't have to shout. Say sorry to Shawna."
Asher:"Sorry Shawna..."
Me:"For shouting at you."
Asher:"... for shouting at you..."
Me:"And? I will not..."
Asher:"I will not do that again."
Me:"Good. That's right. Please don't do that again. It's not polite."
Isaac:"Asher, what about my blue ball? You want this one?"
Asher:"No."
Me:"Asher, say "No, thank you, Kor Kor."
Asher:"No thank you, Kor Kor."
Isaac looked at me pointedly:"Me, Mummy?"
Me:"Ah yes, thank you for offering Asher your ball too, Isaac. That was very kind of you."
Isaac beams.

Why I'm proud of the kidzes: 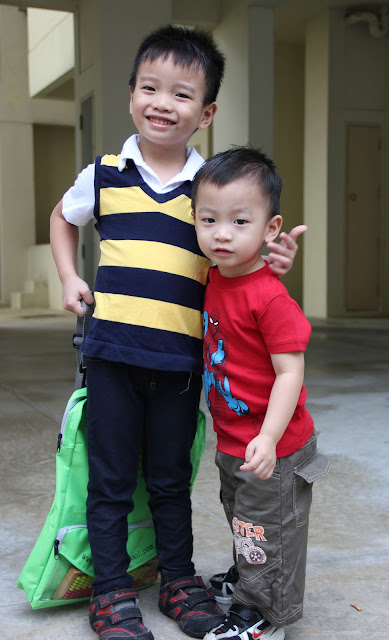 If you noticed, in the conversation above, I also said to Asher "That is not polite." rather than "That is rude." Similarly, I often ask the kidzes to "Please be polite." rather than "Don't be rude." This is my third theory that I believe in. That we should always use positive words rather than negative words.
I have more theories... but enough for now. I'm just so very glad that these theories seem to work on the kidzes. Have a great weekend everyone!
Posted by Pamela at 18:23