I'd always loved playing with toy cars, ever since I was very young. I still have my collection of Matchbox cars and Tamiya cars which I have not even let Isaac peek at. I also enjoyed crafting and making stuff. So when a certain crafty mom Alicia Tan suggested a Crafty Linky Party - I knew I wanted to make a vehicle of some sort. I initially wanted to do boats, but I thought it'd be more fun to do cars instead. And I was right! The kids enjoyed playing with the cars very much. .
The cars are very easy to make, and if you're handy with a penknife, takes probably only 15 minutes to put together. Here, in the first version of the cars, I used the following materials:
That's it. Very economical, ain't it? :p Of course, other tools you would need include the penknife and a large safety pin (see picture above) which I used to poke a hole in the cork first so that it'd be easier for the toothpick to go in later - if you skip this step, the toothpick may keep breaking and/or not enter the cork in the angle you want (which is like perpendicular to the surface - straight in).

I also made a cork-tired car with a Yakult bottle. But as the width of the Yakult bottle was wider than that of the medicine bottle, I had to use satay stick and a regular sized straw for the axels instead of a toothpick and yakult straw. It actually ran smoother than the medicine bottle car coz the regular straw was much wider than aYakult straw, and gave more room for the satay stick axel to turn. The car that Rebecca's holding in the top right hand corner of the top picture, is a yakult bottle car. But by the next day, the cars were still kinda sticky from the marker ink! So, I decided that we had to "colour them" another way. You could paint it, I suppose. But I didn't want pain flaking off the kids' hands when they played with the cars, so I went with pasting magazine paper over and white glue. Plus this is a nice and safe activity which the kids could get involved in - and there was no danger of permanent ink going on where it shouldn't be.

Yes, I was a bit perfectionist and did the first two on the bottom row. Shawna helped squeeze the glue for me, though. And I'm really proud of Asher for pasting all the green facing up! Green's his favourite colour!

The only problem with these cork-tire cars, was that, kids being kids, were kinda rough when playing with the cars - and the wheels would drop off. Also... friends were commenting that it wasn't easy to find corks (seems like nobody is crazy like me and collected the corks from my wedding reception - er, like 7 years ago). So... I had a brainwave! Use bottle caps! Surely that'd be easy enough to collect!
Previously, with the cork tires, you just had to sharpen the satay stick to be like a toothpick, and just pierce it right through. Now, with the bottle cap, you have to shave the tip of the satay stick like below. It must have two features (1) the tip should be sharp (2) there should be a groove - this groove is very important. This is where your wheel will be held in place. So what you do, is that after you fashion the satay stick in the way shown above, you poke a hole in the centre of the bottlecap with the safety pin, then poke the satay stick through till you hear a click, or feel the wheel getting engaged in the groove. Do that to all four sides, and your car is done! :)

Subsequently, I made a vehicle the same way with a 500ml bottle, at first with cork tires. But Isaac liked the bottle cap tires so much he requested to have the tires changed. Watch the two videos below of Shawna and Isaac playing with the bus - oh yes, we called it the bus because it was more than twice the length of the cars. 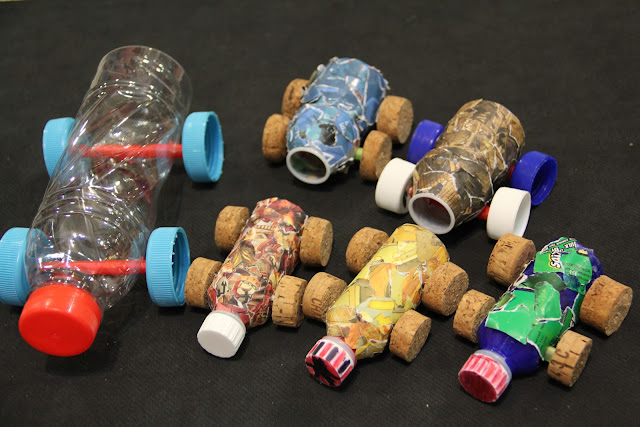 The possibilities are endless! You could use boxes, but I like to use bottles as they are more durable than thin cardboard boxes are. Build an entire fleet of cars, buses, and other vehicles. Isaac has drawn me his blueprint of how he thinks a tractor can be built. So, what are you waiting for?  Make-Your-Own-Car today! :) Or better yet, get Daddy to do this!!! :)
This post is part of the "Two Weeks of Creative Fun" series mooted by the brilliant Alicia Tan, An Accidental Homeschooling Mum - so there is more creative goodness out there for you! Ain't that simply faboo! :) Just go to the links below! 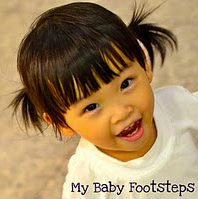 As you can see from the above schedule, next up is Ming Yuan! She is a mom who is always on the lookout for exciting adventures and interesting activities to engage her super-active 3 year-old. She blogs about their lives together to capture their memories, so that years down the road when when her girl grows up not remembering how she spent her childhood, she will know. And so that days, months or years down the road when people ask Ming Yuan about what they do together, they will have their blog to share.