A Day in the Life of Playful Pamela!

This Day In A Life (DIAL) guest-post I wrote first appeared here :) Read more DIAL posts by more than 12 mums collated in links over at the Day In A Life series by Mum in the Making!

When Justina first approached me to contribute to this new series that she was hosting, I thought it'd be fun. What I didn't expect was that I had to consciously remember to take pictures to chronicle the day! So below is a post on what happens on an average weekday of my life, consisting of a compilation of photos taken across several average weekdays. 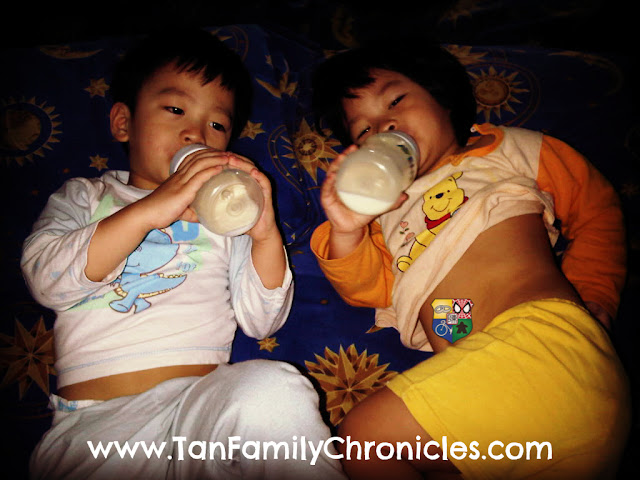 Of the three children, Shawna is usually the one who wakes up first, at approximately 6.45am. After snuggling up to me for ten minutes or so, she will go out and "order milk" from our helper. I.e. she will ask our helper to make milk for Asher and herself, and she will patiently wait for the milk and bring the bottles into the bedroom. This is how I steal another 5 minutes of shut-eye :p 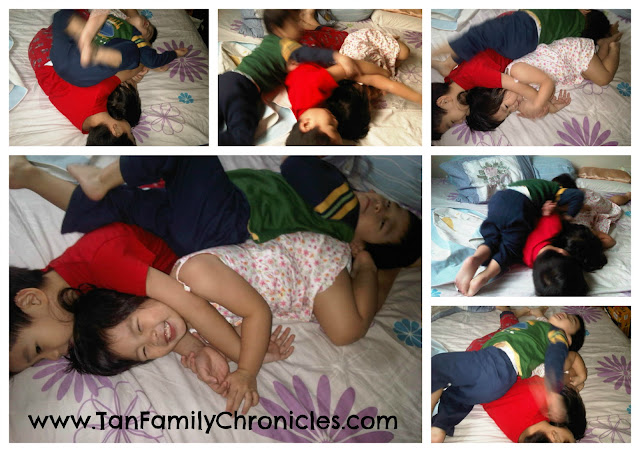 After the twins finish their milk (while I check my phone for Facebook updates that were chalked up over the night), they proceed to give their older brother Isaac a wake up call... They will try asking him nicely to wake up, followed by nudging, then pushing, then climbing on him to wake him up. Once Isaac is up, the three of them start tumbling around together amid my cries of "Please be gentle with each other!!!" 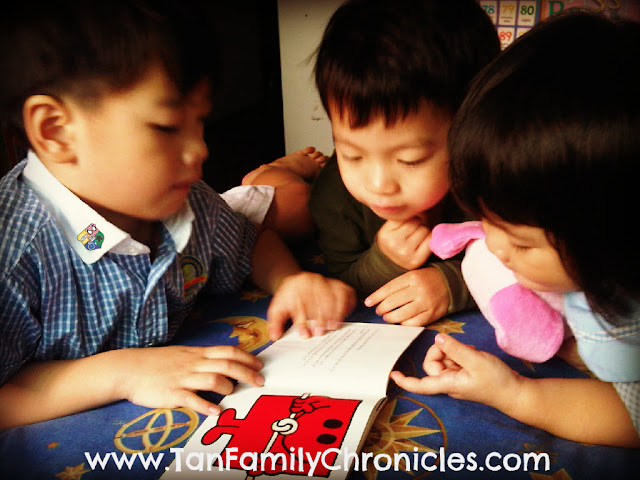 Shawna would be the first to get changed, followed by Isaac. Asher tends to drag it out a little and be the last to get changed. While hubbs and I bathe and get dressed, we tell the kids to entertain themselves by reading. Isaac would either pick a book he wants to read and start reading it, or the twins would pick a book and ask their elder brother to read it to them. 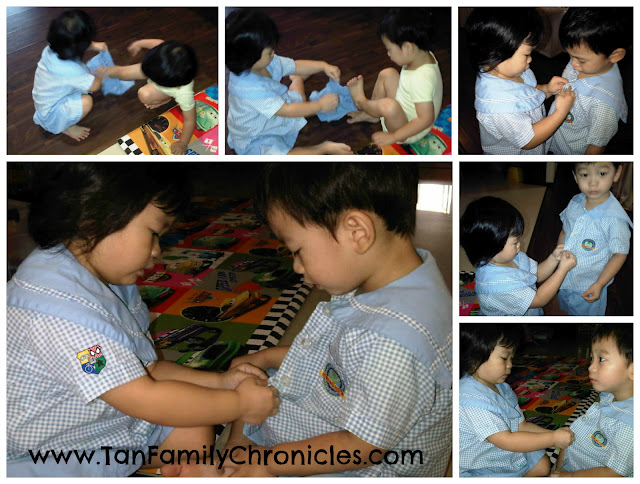 Next, dressing Asher! Usually, either hubbs or I would have to haul Asher off to the next room, and pass him to our helper for her to help dress him. On quite a few days, he would simply refuse to change. Shawna, despite the fact that she is the youngest of the three kids, acts like the Big Sister and would chase after Asher with a set of his uniform, asking him to change. Asher usually obliges her, and allows her to help him wear his pants (top two pix) even though he is well capable of putting it on himself. Nowadays, Shawna even does up the buttons for Asher. He is always patient and quietly waits for her to be done. 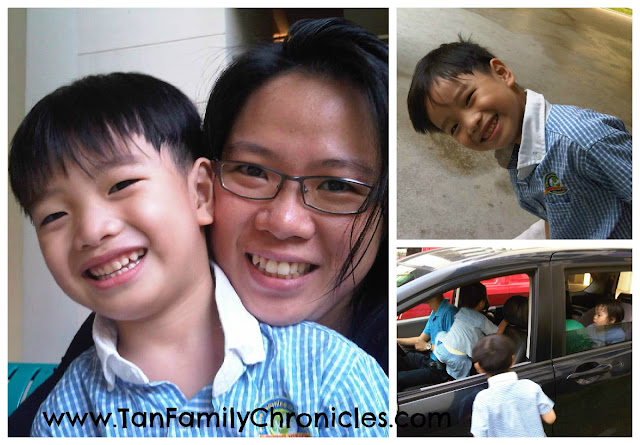 It's 8.15am and we're at the void deck (with all our bags and stuff) waiting for hubbs to drive down the car from the multi-storey carpark. Every day, Asher & Shawna would follow hubbs to the carpark to drive the car down. Hubbs would wind down the windows and as he drives down the storeys, every time the car window faces our direction, the kids would shout "HELLO!!!" through the windows. Isaac and I would wait at the void deck. Some days we play "What's the time, Mr Wolf?", sometimes we talk and chit chat about what he did in school or about his friends. When he is smiley and in a good mood, we'd take pictures of ourselves! 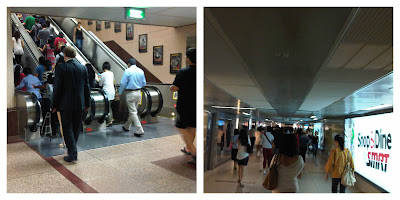 Hubbs drop me off at the nearby MRT station before driving the kids to school. I take the train to work and it is about 9:15am by the time I walk to my office building. Glad to have missed the bulk of office crowd who must have rushed to get in before 9. 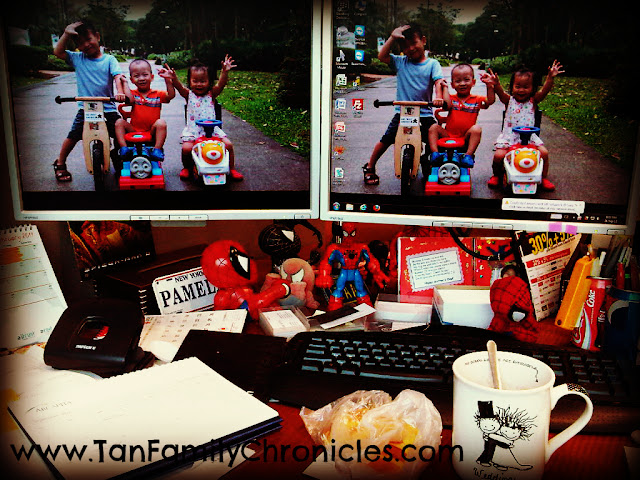 9.30am at my desk, booting up the computer, switching on the radio... I have my coffee in a large over-sized mug which was given to us on our wedding day by hubbs' students (yes, he's a teacher!)... After breakfast, work begins! 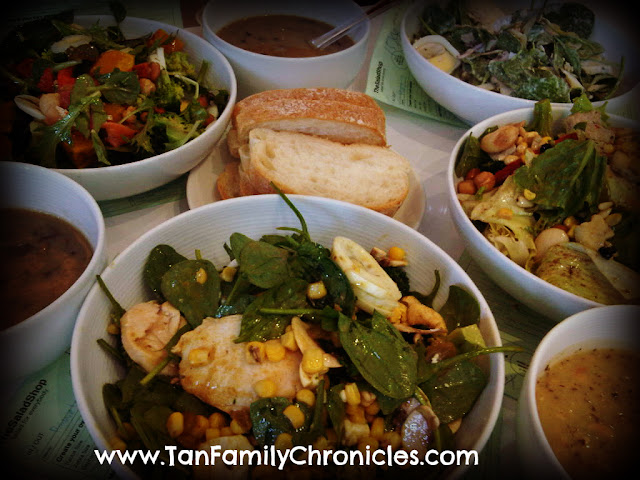 12 noon - Lunch time! Colleagues and I love this salad place not far from our office. It's not exactly cheap, each bowl of salad above costs between $10 to $12.50. But salads in this area all cost that much so, we don't have much choice. That's my salad at the bottom of the picture consisting of: spinach leaves, poached chicken, broccolli, sweet corn, raisins, feta cheese, mushrooms, boiled egg and cashew nuts, with honey mustard sauce. $10!

It's 8pm and the kids are having their dinner at home. We have this Little Tikes bench (which the Chanders gave us two Christmases ago) that would comfortably sit 2 kids on each side of the table, but no, on some days (such as this) they would insist on all squeezing at one side. 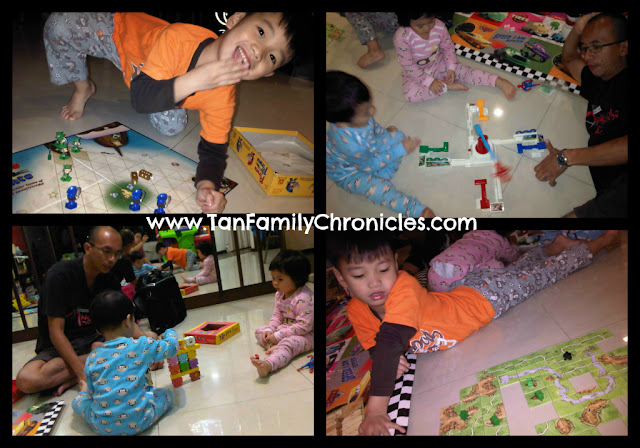 After dinner we play boardgames! Usually hubbs and I would "divide and conquer", meaning, he will take the twins and play with them a game, and I will play a game with Isaac, or vice versa. This is because they each have their favourite games of the moment, since games are usually age-appropriate at that young age. So the games which Asher & Shawna would like would usually be too simple and not challenging enough for Isaac. Occasionally, we do play games together, all five of us. Games suitable for this are usually dexterity based, like Toc Toc Woodman, which is a recent favourite.

Occasionally, the boys have war games! When this happens, I will either play another board game with Shawna, or we will go in to read books together. This is where I get my personal bonding time with my daughter while the boys play with Papa.

When it's late and time to sleep, we make sure the kids keep the games and toys before we troop off to the bedroom for milk (the twins) and story time! Hubbs is in charge of reading Chinese books, whilst the English books are my department! :) When we are done with the books, it's time to brush teeth, off lights, and off to sleep! 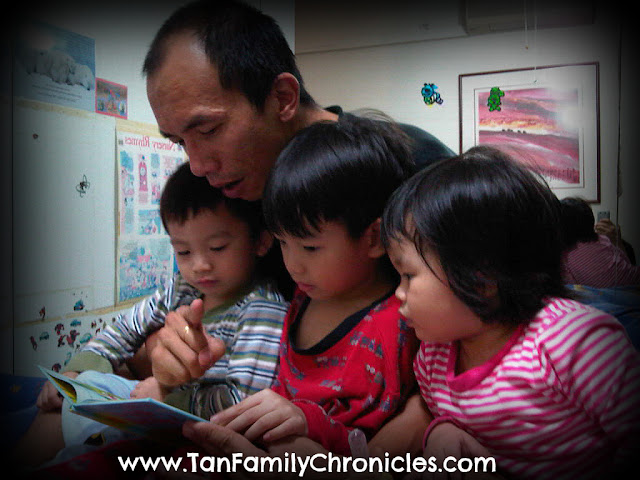 Liked this DIAL (Day In A Life) post? Read more DIAL posts by more than 12 mums collated in links over at the Day In A Life series by Mum in the Making!
Posted by Pamela at 10:45