We built these lanterns!

Yet another long overdue post: about the lanterns we built for the Mid-Autumn Festival this year. Didn't have time to post this before coz it took place just before our trip. But I wanna show you what we made!!! :)

The kids came home and told us that it was a school assignment for them to make a lantern. I said:"Oh, you want ang pow paper is it? No problem, Mummy got lots of ang pow paper for you to take to school..." But Isaac said:"No, Mummy, no need to bring ang pow paper to school. We just make the lantern and bring the lantern to school, can already!" I see!

Inspired by one of the Singapore Mom Bloggers - Hai Fang's wonderful creations here and here - we set out to build some lanterns. Ours weren't as well-executed as Hai Fang's ones were - partly coz I was too lazy to paint the lanterns (confess that I am rather afraid of the mess paint creates). Nevertheless, I pledge myself to try harder next year! hahaha...
So we had the two lanterns above for Isaac and Shawna. What about Asher? He loves the colour green, and I had this green tea can that I was itching to make a craft out of. So I made a lantern of it, and this is what Asher got to bring to school to hand in.

So we did the rush jobs above over one night, just so that the kids could bring something to school to hand in, right? But I wasn't exactly pleased about the standard of the lanterns that turned out. So I started tinkering around, and did the following one made out of three takeaway food carriers joined together. Found the pink and red gauze/ribbons and added that to give it some colour. Ended up tying up the ribbons to give the lantern more stability. Looked great with the candle lit up!

I had so much fun making the can lantern, that I made another one. Also, this is for Isaac coz he requested for one of his own in red, one of his favourite colours! It's very easy to make as well - just use a regular penknife to cut some crosses, and using a pen (and then your fingers), push the flaps in. This ensures that the edges are not sharp too. The big window in the can (so that we can put in the candle, as well as for ventilation), is made by cutting a squarish U shape.  Roll up the piece and tuck it into the can. Leave a margin on the other three sides and fold them into the can - again, ensuring that there are no sharp edges to hurt anyone.


Our flight to Perth was on the night of the Mid-Autumn Festival. So here we are, below, playing with the lit lanterns, before it was time for us to go to the airport. We didn't get to light up the plane and the space shuttle that night as they were still in display in the kids' school. I had to make the 100plus can lantern coz Isaac twisted off the tab on the top of the coke can, so we couldn't "hang" it! 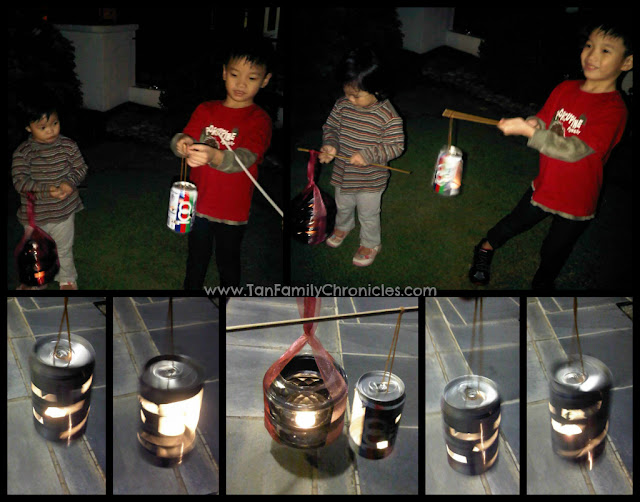 The can lantern looks better 'in person' than it turned out in the pix it was stationary in. So i twisted the rubber band it was suspended on, and made the can spin when I took the pictures, so that you can see the light in the pictures of the can above.

I think the can lantern would make a great lighting piece for like garden furniture, ya know, if you wanna sit out for a cuppa wine or ice-cream! :) Romantic lighting, recycling style! :)
Posted by Pamela at 01:23