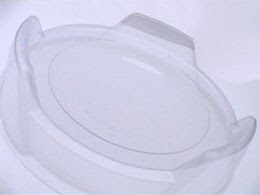 Even before I bought Isaac his first stadium, I have been itching to make a stadium myself. Just look at the picture on the right - this looks exactly like the stadium we lost. The other stadiums sold in the shops looked just like these, and/or with some variations like in colour, or slightly different shape. Essentially, they are some plastic dish with a rounded bottom - so that the tops will gravitae towards each other and "fight". They charge $30 to $90 for some of these?! Daylight robbery! In fact, over Christmas I was on the look out for those huge sushi platters - I thought either the top cover or the bottom piece of the huge round sushi platters would make a fine stadium indeed.  I also felt that I could make a stadium out of cardboard. But I was very busy before Christmas, and never got round to making the stadium. Besides, we had already caved and bought Isaac his stadium weeks before - waiting for him to unwrap it on Christmas day.

But now that we lost our stadium, it had given me a strong urge to make a stadium again. We could always have gone to the shops and bought a replacement outright. But I felt that that would send Isaac the wrong message. Like, it's no big deal to lose something, Mummy & Papa can just buy a new one. No no, that's not good. We want him to learn the value of money. And we also want him to feel the pinch, so that he is mindful of his own belongings and careful with them. For even though, yes, this time, it wasn't his fault that the stuff was lost, but this is still an important lesson to learn.

And being the crafty me (as in art & craft and not "sly", silly!!! ;p), I would like him to get creative and think of how we can use the stuff around us to make what we want, instead of thinking of buying and spending money all the time. Besides, it's fun and satisfying.

So I started formulating the blueprint of the stadium in my head. Of how I can use cardboard to make it. It was a stroke of luck that I came across a good sized box that my mother-in-law was throwing out, that would be a good fit for the stadium I was planning to construct. But I imagine any box of approximate that size would be good as well. 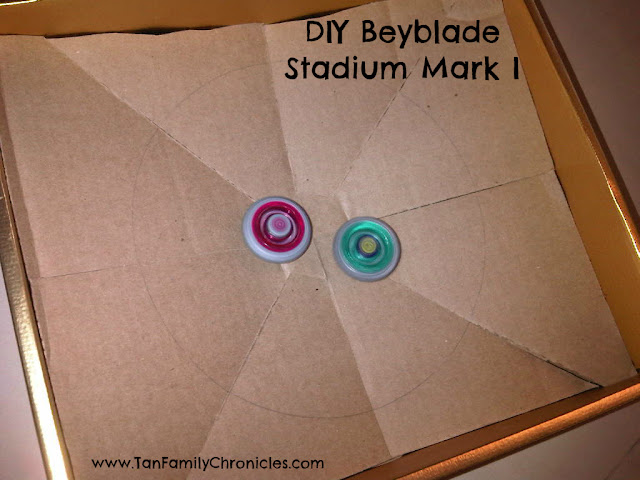 This is our DIY Beyblade Stadium Mark I.

The box is approximately 40cm by 30cm - a square would be better actually - but this worked fine enough. I didn't document with pictures as I was making this stadium coz I was too eager to do it and try it to see if it would work. It worked pretty well, but the weight of the Beyblades started to weigh down the pieces of cardboard such that the gaps were getting bigger. So I taped them down with coloured red and blue tape. (After thought: dang! Think washi tape would be great here!!!) Manage to capture the video below of the Mark I stadium in action.


I was quite proud of this stadium. Coz it worked!!! (Of course it did - I made it!!! :p) But as I had made it in a rush, I felt it was not precise enough, and was itching to make another one. And so I did. Here comes the Home-Made DIY Beyblade Stadium tutorial.
Look at The Tan Family Home-Made DIY Beyblade Stadium Mark II. Looks nice and spiffy if I must say so myself :) It's a little too steep in my own (nit-pick) opinion. But it works pretty well. If you must know... Isaac's favourite colour is red, Shawna likes yellow, and Asher likes green. I didn't have the cloth tape (whadya call it? the tape with the cloth fibre in it) in green, so I just let him beautify the middle with the green sticky tape. As an after-thought, I decided to add the white circumference tape as I felt that that would neaten the edges. 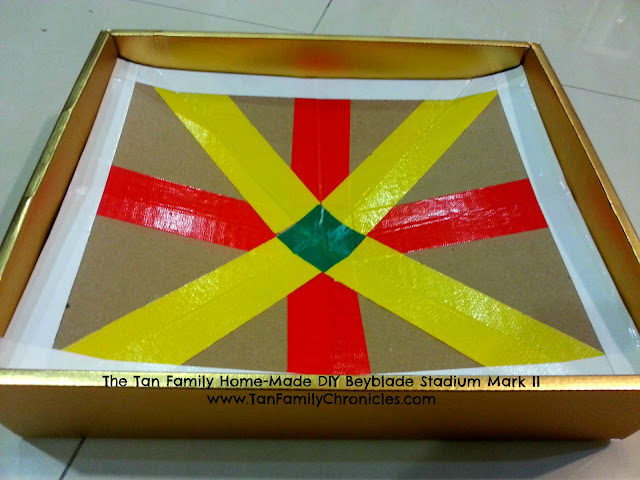 Now, let's see the Mark II stadium in action! There are three short videos played in succession. Be sure to watch all three!

So! Not too shabby, eh?! I'm quite pleased with it, on the whole. Though, Isaac brought my big head down to earth with his proclaimation:"I still like the real stadium." *dursh* I just nodded, and kept silent. Natalie, my 5 year old niece, who was playing Beyblades with Isaac on the Mark II stadium when he made that remark, quickly said:"Don't be rude to your Mummy, Isaac. She made the stadium for you!" I burst out laughing coz she is quite the precocious one, Natalie is. "Yeah, Isaac, just treat this as a different sort of stadium to challenge your Beyblades in!" I said.

I must admit that I feel like making more stadiums. It's fun and challenging. Will blog about them if I do! :) Make one yourself and send me a picture! I'd put it on the Tan Family Chronicles Facebook Page! (Have you LIKE-ed us already?! :p)

Next up! The Beyblade Saga Part 3: How I bought our replacement Beyblades & stadium!