About a month or so ago, fellow mom blogger Evelyn Tan-Rogers of The BottomsUp Blog told us of the (then) upcoming annual Singapore American School White Elephant Sale - which was to take place on the 11th of May this year. She even shared with us her loot from last year's sale. Oooh! I love a good yard sale and thrift store! I was determined to go. I even thought of what I'd say to hubbs if he was reluctant to go: "Make it my birthday treat?" - but thankfully he was quite game for it and I didn't have to use my lame line on him.

Held at the SAS Junior School foyer, it was a hive of activity and I could see people carting off their loot, even though I arrived relatively early (I thought!) at 9 plus. Thankfully, there were three playgrounds surrounding the foyer area so hubbs kept the kids busy with those while I shopped to my hearts content. And shop, I did! Scored many good buys. Shall list them, and perhaps you can spot them in the pictures! :)


Pictured below are the comics that I bought that cost me a grand total of $6! Mighty pleased with this buy! The two Batman books right at the bottom are hard cover 1cm thick good quality comic book. I couldn't believe they were hawking it for $2 each! I know the shops would sell something like this for a minimum of $20, most likely more!

The other comics were still in their clear plastic bag, going at 5 for $1. Asher asked to get 2, so I told him and Shawna to pick 5 in total. Isaac came back from the loo, and I told him to pick another 5. We paid up. And then, 15 minutes later, while waiting by our loot coz hubbs brought the twins to the toilet to change diapers - the stall holder's Mother (I think) came back, and lowered the price to 10 for $1 !!! I couldn't help but go:"I just paid $2 for ten of those!" And she said:"Oh go ahead and pick 5 more!" I was stunned, and said meekly:"Oh, really?" And she said :" Yes yes, go ahead. I was too busy shopping myself to man this stall earlier. Go ahead!" And so, I selected another 5 more, without paying anything more. Reaching home, when we took the comics out of the plastic bags, we realised that some packs had 2 comics in it! That's how we ended up with 25 comics for $2 !

I even found Nausicaa of the Valley of the Wind by Hayao Miyazaki comics! Wow! I have never seen that! I first knew of this from the Studio Ghibli movie of the same name. Way cool!!! 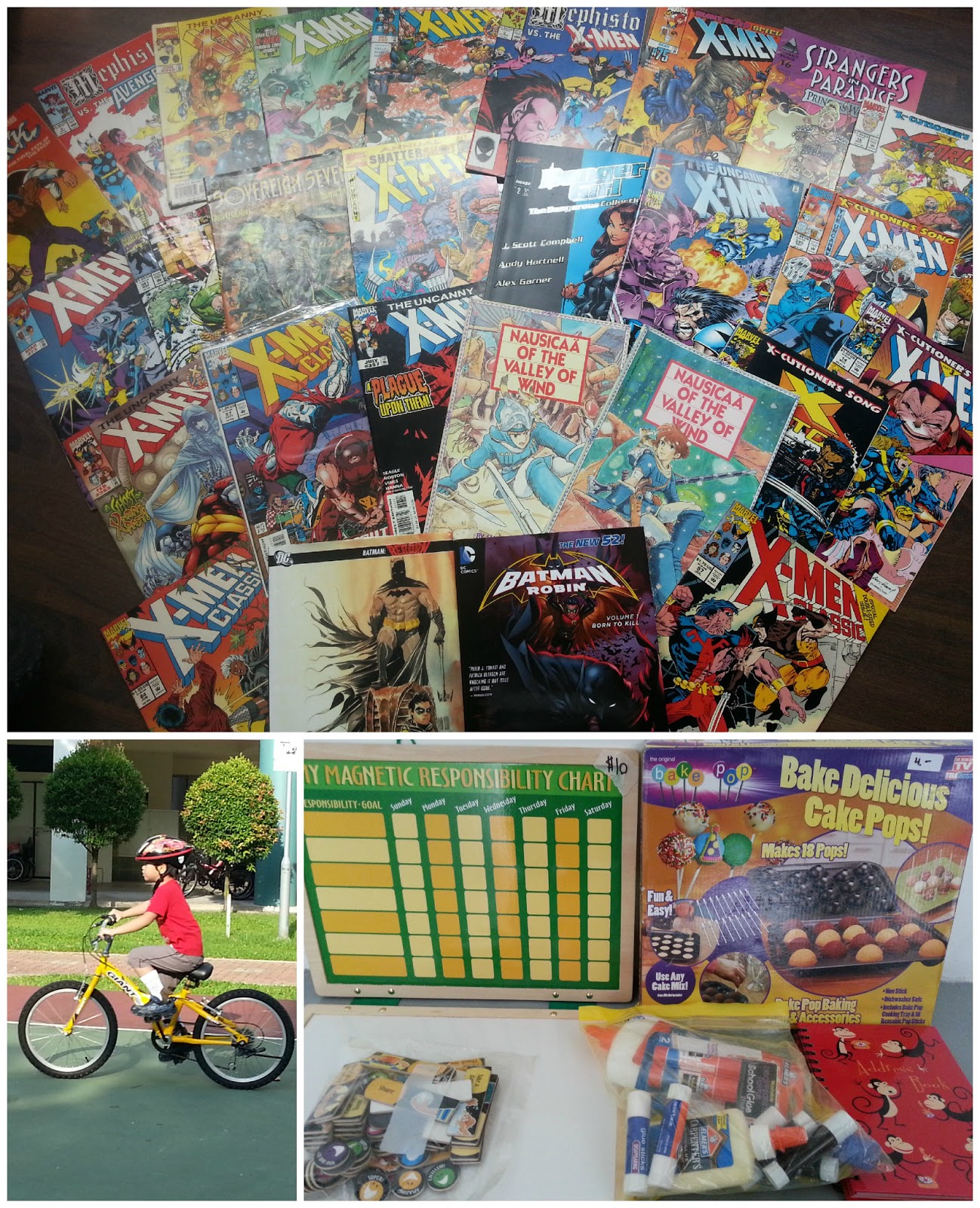 And there you see Isaac trying out his new bike! :) We're getting closer to our dream of making cycling trips as a family together! :) Shawna is already proficient on her balance bike, and Asher is very fast on his scooter as well. Looks like we could do a family biking/scooting adventure soon! :p
Posted by Pamela at 14:08