Remember our little Incredible Hulk? We call him Asher. He calls himself The Incredible Hulk - because the Hulk is green and Asher loves the colour green. That's him below in his three favourite green shirts. Which is about half of all the green shirts he has coz everything else passed down from Isaac is mostly red, and usually anything but green.

Oh wait, that green army suit is passed down from Isaac. Technically, it was hubbs... It is hubbs' actual old Number Fours that were destined for the bin coz the army came up with those new pixelised camo greens. But the helper we had at the time, Hser Khu, was very handy with the sewing machine, and so she used hubbs old uniform to make a child sized suit for Isaac. See Isaac in the same suit here! He's hardly recognizable!

But this post isn't about Asher's green threads, it is about how we make a toddler eat the things we want him to! :) 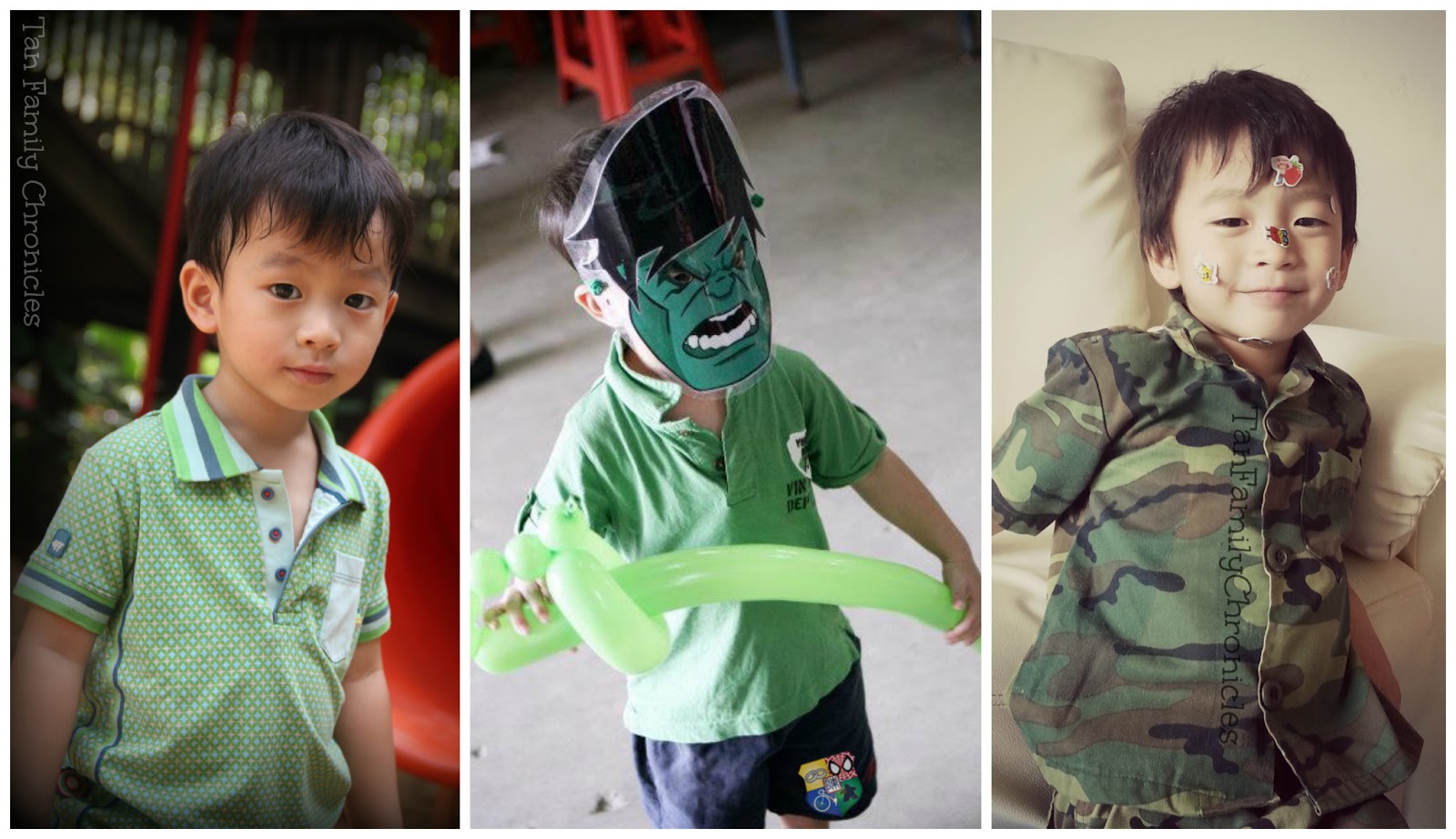 You know how I have mentioned before about Asher being such a lazy eater, and that the only thing he would open his mouth for is chocolate... Well, you might not remember coz that was so long ago. At that time, I thought Asher would outgrow it, and start eating properly sooner or later, like maybe when he was 3 years old or something. But no, he turned 3 early this year, and still he was refusing food. Oh, he's much better now. He would eat rice, and noodles, pasta etc. But he'd only eat the carbo and neither the vegetables nor the meat. Any kind of vegetables and meat, or rather, every kind, no matter what kind of vege or meat - he refuses. But he would drink soup. So his meals would consist mainly of carbo+soup. Rice and soup. Noodles and soup. Pasta and soup. The only exception is spaghetti bolognaise  - which is his favourite savoury dish.


Asher's constipation threatened to come back, with the usual signs of rock hard stools, and his difficulty in poo-ing, and of course - blood in his stools which is not really in his stools, but actually from his anus splitting due to the hard poo. Asher's constipation woes are legendary in our household - a long overdue post that I wanted to write but have yet to get around to. So it was the fear of his constipation rearing its ugly head that causes me to have an inspiration...

"Asher..." I said to my dear boy one day "You are the Incredible Hulk, right?" "Yes, Mummy, I am Incredible Hulk. HUUURRR..." He growls at me and strikes a menacing stance with his skinny arms raised in a fighting pose. "Right... so... you must drink Green Soup! Coz Incredible Hulk is green and he needs Green Soup! Right?" "Yes! Green Soup!" exclaims Asher, agreeably. Quickly, I ask my helper to have some of the spinach she cooked for dinner tonight blended into fine paste, and added to the clear soup to make Green Soup. And Incredible Asher Hulk, ate it all. The entire bowl of Green Soup and Rice, he finished every last bit. 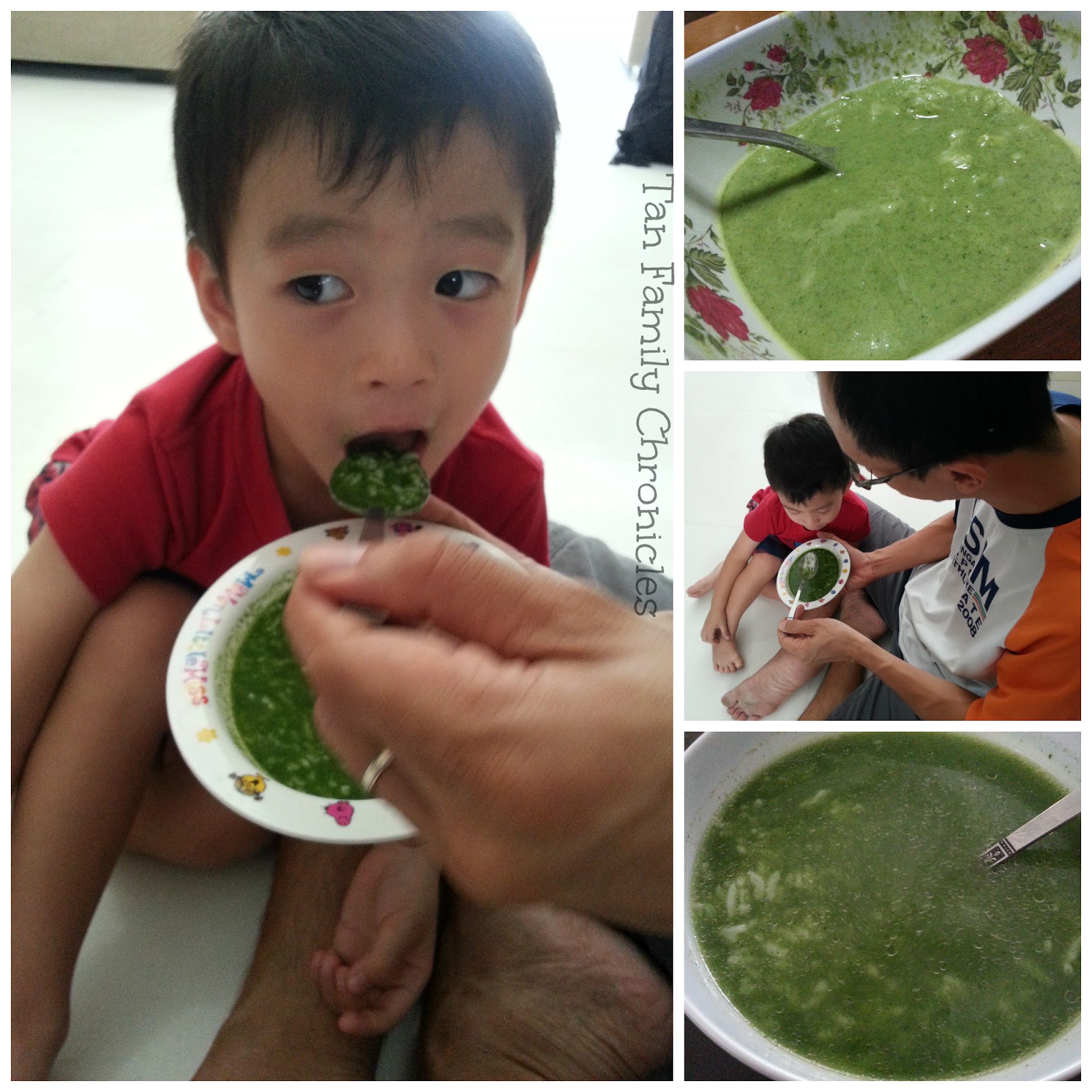 And so he has since that fateful first bowl of green soup. In this picture collage above, there are three different bowls of his green soup. If you look closely, you can see that the top right hand corner bowl of green soup is a little more murky and creamy looking. The bottom right hand corner soup is a slightly clearer army green. Whilst the green soup in the main picture is quite swamp thingy green. He loves his soup, as long as it is green. When we leave the house every morning, he would say to my helper:"Auntie, you remember to cook green soup, okay?"

In the beginning, we only blended the vegetables. But after a week of so of that, with Asher lapping up bowl after bowl of green soup - but still refusing fish, meat, eggs, tofu, everything else, really... I got the idea of adding them all into the blender. So now, every night, we would put whatever was cooked for dinner into the blender and blend it all. We'd make sure there were enough greens in them so that they'd turn the soup green. But now, the green soup is a nutritious mix of meat, fish, eggs, tofu and whatever the rest of us were having for dinner. And because these dishes were all cooked already, the mixture is certainly very tasty indeed, albeit looking a tad disgusting to the rest of us. But for The Incredible Asher Hulk, green soup is the most delicious thing ever. Thankfully, he doesn't question why his green soup often takes on different tastes and different textures and consistency. He just finishes it all.

We used to have difficulty making him eat bread too. I love bread, and so I was particularly keen in introducing him to this wonderful food. But nope, even spreading Nutella chocolate spread on bread is NOT a sure hit with this chocolate loving boy. Then one day, my mother got him to eat a whole slice of bread. Can you guess what bread it is? That's right! Green bread! Pandan flavoured bread! He loved it! Now, he constantly asks for "Green bread!" and he would even eat it plain.

Just two evenings ago, he was eating his green bread while I was cutting his toenails. Poor Asher has a tendency to get ingrown toenails, something unfortunate that was inherited from me. However, thanks (or no thanks!) to that, I am very familiar with how to handle ingrown nails. So as I was relieving him of the nails that poke in his toes to cause him pain with every step he takes, he gave a contented sigh and said "So good..." I looked up and grinned at him as I pulled out the offending piece of dead calcium. I press the side of his toe and said triumphantly "Shiok right? No more pain..."  "Huh?" He says to me "Oh, yah, not pain." He looks like he just woke up from a nice dream... Ah... I realise something... "Asher, what is so good?" I asked. "Green bread, Mummy! It's soooo goood!!!" Laughing to myself, I asked him "What is so good about it? That it tastes so good? or the colour?" "The green colour, Mummy! Look!"

That's our Incredible Asher Hulk for you. Our lovely Green Boy :)
Posted by Pamela at 01:23