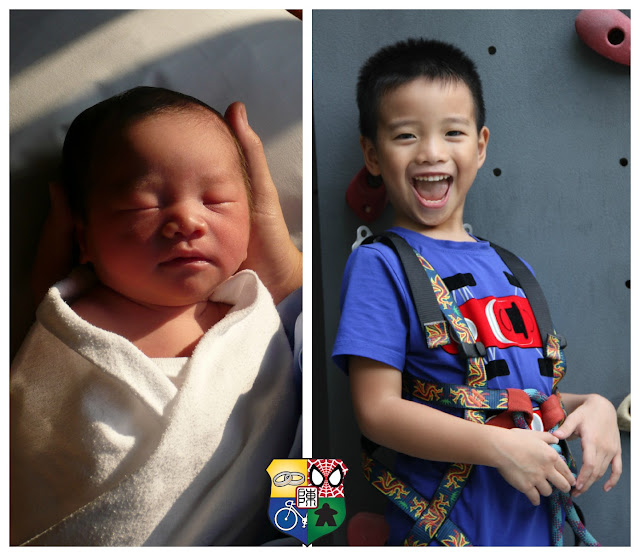 In a blink of an eye, Isaac turns 6 this year. Okay, make that many blinks of many eyes. But look how he's grown. That picture above on the left was taken on the day he was born, barely ten hours since he'd left my womb. The photo on the right was taken this year, two days before his 6th birthday.

I was just scanning through the blog posts that were written during the month he was born... Sure brings back memories... and the thought that keeps repeating itself in my head surfaces again: My baby Isaac has all grown up! He is no longer a baby, and hasn't been for years. But somehow this year, it seems particularly stark, and in my head, I started to list the reasons why...

Isaac's like a mini-adult now. We can actually have pretty mature, reasonable and sane discussions and conversations with him. We see and hear him disciplining the twins like we do (the kids). And when he hears hubbs and I talking about something, he would often ask what we are talking about and join in our conversation. He has his own thoughts and ideas, and more often than not, his arguments makes sense and he actually has a point to make.

Isaac can read independently now. And boy is he a voracious reader! He reads so quickly that he often finishes reading the stash I borrow from the library by the very next day. We can now sub-contract reading to the twins, to him. The twins usually prefer hubbs or I to read to them, not because they don't want kor kor to do so, but rather, they want me or hubbs to do it. And so we do. But when they see that hubbs and I are really indisposed at the moment, they would happily allow Isaac to read to them. 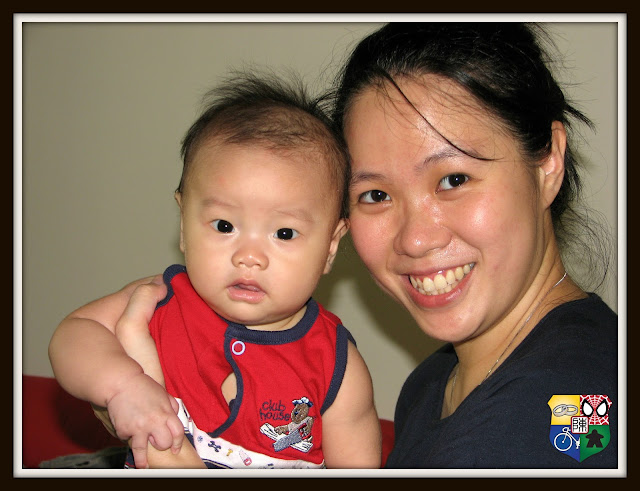 Isaac can reach the light switches! It's incredible. Suddenly, seemingly overnight, he can switch on the light to the toilet by himself. But, he claims to be afraid of the dark. No fear, we usually send Shawna with him a la...

Isaac: "Mummy, I want to go pass urine! Switch on light for me!"
Me: "You can reach the light switch what. Go switch on the lights yourself!"
Isaac: "But I am afraid of the daaarrrk..."
Shawna: " I am NOT afraid of the dark!"
Me: "Perfect! Shawna, you go with him!"
And Shawna would accompany Isaac into the dark corridor until they reach the toilet where Isaac turns on the light and enters the toilet to pee...

But seriously, he is growing taller by the minute - unless his pants all shrunk simultaneously, for I am seeing more of his ankles and shins nowadays... 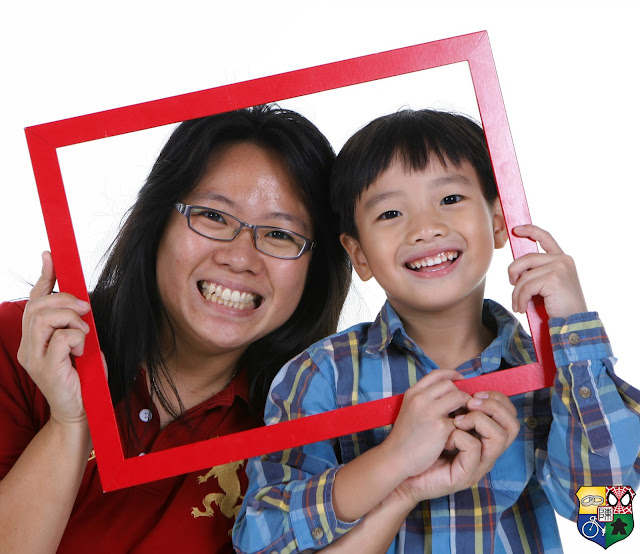 Isaac's going Primary One next year!!! It is truly a milestone when a child begins his formal education. Isaac's been psyched up for primary school too, by his childcare teacher. They have been doing a good job of teaching the K2 class about what to expect next year in a primary school. Isaac's excited and more than once, he has already informed me "Mummy, I am looking forward to going primary school." Truth be told, so am I! I've heard so much about the stresses related to primary school, that I have been mentally prepping myself for it. Also helps that I decided earlier this year, not to look for a full time job (when my previous company closed its Singapore office), and do my My First Games biz full time, in order to have flexi working hours and more time next year to guide Isaac through the vagaries of P1.

Isaac's just had a pep talk on how to deal with bullies. I had initially started writing about it here, and then it started getting too long... so I will have that coming up in another post. But suffice to say that it really struck home the realisation that school-going kids bring home problems of a different nature compared to when they were young, when most problems were either health, eating, sleeping or poo related. We have consciously tried to get Isaac to talk more about his feelings and tell us about what goes on in school, with his friends etc. We want him to be able to talk to us instead of bottling it all up inside...

Thus, as evidenced above, even though my Isaac is currently afraid of the dark (he didn't used to be), and he is still very much a little boy in many ways... He is definitely growing up. I look back on my blog posts, and see my past photos and videos of Isaac when he was much younger, and I kinda miss him. However, we are very blessed, that Isaac's generally very well behaved, a joy to be with, and we pray that he will continue to be the wonderful, smart and kind boy that he is today.