Are you going to Brave Maeve, The Musical?

Have you heard of Brave Maeve?


I first heard of Brave Maeve when I read this article, whose link I came across when someone shared it on Facebook. Maeve is a little girl who contracted cancer when she was three years old. Her parents brought her for medical treatment and rallied around her trying to ease her discomfort and ride out the difficult journey with her. Along the way, Maeve's mother, Joanne Poon, wrote a story for Maeve, trying to help her understand in simple terms, the grueling chemotherapy treatment she was going through. Thankfully, Maeve, who is currently about 7 years old, is now well. The story has since been published into a book, and now there is a musical on about it!

Watch this video below, and read this article.

This is such a heartwarming story of love and hope, that when I found out that the book has been published, I wanted to buy it, even though it was available for borrowing from all National Libraries in Singapore. Upon further investigation, I realised it was actually made free, you just had to go pick it up! I immediately made a trip down to pick up the book. Due to its popularity, I understand that there's not likely to be anymore copies of the book available for pick up. However, in addition to the National Library, Brave Maeve the book can be read at in Children's Cancer Foundation offices in National University Hospital and KKHospital, Singapore.

Joanne's dream, is to make this book available in all paediatric oncology wards around the world, so if hospital outside Singapore would like a copy of the book, just email bravemaevesingapore@gmail.com to request for one. In fact, kind volunteers have translated the book into the following languages: Chinese, Malay, Bahasa Indonesia, Russian, German, Vietnamese, Spanish, and French. The translated word documents of these languages can be downloaded off the Brave Maeve Singapore Facebook Page. 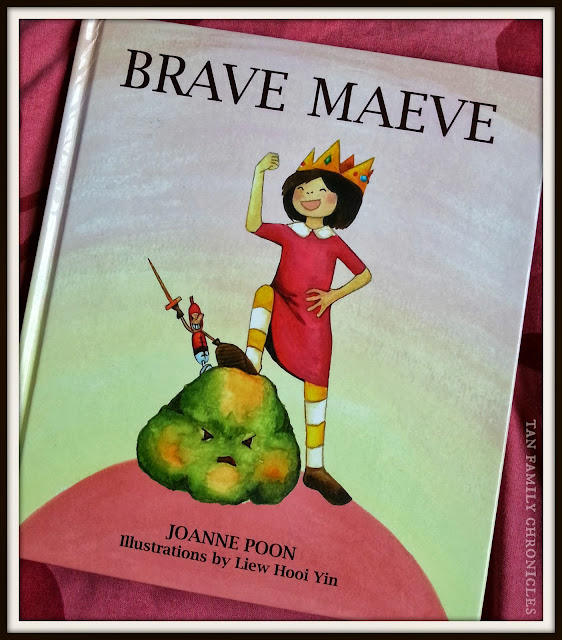 The twins, Asher & Shawna, simply love the book. From the day I brought it home, the twins would often request for it. Often, we would have to read it back to back for at least two times, before we could move on to reading a different book. Now, they know it so well that they can read along with me, finishing the sentences of every line. They would ask me questions, like, why Brave Maeve had to go for X-rays, and why her parents had to stand outside the door and not beside her when she was having her X-ray taken. Every time the kids refused to take their medication when they are ill, I'd say "Remember Brave Maeve? You have to let the good soldiers in to fight the bad soldiers. Medicine is your good soldiers. You need to let them into you so that they can fight the bad soldiers for you to poo them out!" and they'd relent, open their mouths and swallow the medicine I was administering.

So you can imagine my excitement when I realised that they were putting up a Brave Maeve Musical! Wooohooo! Check out the cool poster below! We bought tickets for ourselves, and we're bringing my three nieces along too! The kids are so psyched up and keep asking me when they are going to see the Brave Maeve performance. We can't wait! :) 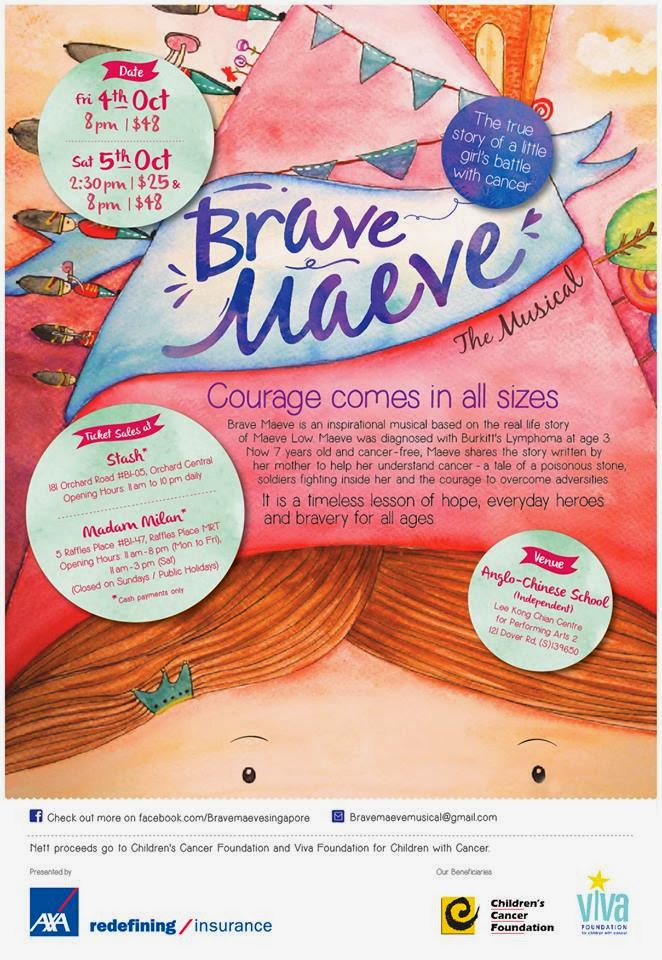 Do you want to go to the Brave Maeve Musical too? As of right now, I understand that there are still approximately 100 to 200 tickets available for the Friday night 8pm show on 4th October 2013, as well as limited tickets available for the Saturday night 5th October 8pm show. Venue is at 121 Dover Road, Singapore 139650 Lee Kong Chian Centre for Performing Arts 2 at The Anglo-Chinese School (Independent). Email bravemaevemusical@gmail.com to book your tickets now!

Brave Maeve the book would be available at The Musical for a minimum donation of S$15 per book. This goes towards funding for a reprint :) You may also read more above Brave Maeve, her mummy Joanne, and their journey with childhood cancer in this blog post here on The Playful Parents.

Please note that this is not a sponsored post - I paid for my tickets! :) I just feel that this is a very worthy cause that we should support! :) Oh wait! Want to see Maeve herself? This video below is a video of Brave Maeve reading the story that her mummy wrote for her! :)

The Brave Maeve from Singaporean of the Day on Vimeo.
Posted by Pamela at 13:37