Kisses are the best medicine ever!

I've so much stuff to blog about that my backlog of posts that's been festering in my mind, is truly staggering. One of them is this picture above that I took of the twins way back in January 2012, when the Asher & Shawna were about 23 months old.

We were downstairs our block, in our estate, and I wanted to take pictures of the kids, especially since the twins were decked out in matching outfits. So I had my camera out and ready. Then, from the corner of my eye, I saw Shawna, trip and fall. She was on the grass, and she wasn't running, so it wasn't a bad fall, and she didn't cry at all. Before I could say or do anything, I observed that Asher had also seen her fall, and started walking towards his twin sister.

Shawna stood up on her own, and looked at her hand, examining the damage caused by the fall. Without a word, she held up her palm to Asher, and he bent his head to give her palm a kiss, to comfort her over her fall. Unfortunately, I caught them in the above picture just slightly before he planted the kiss. But oh... tears welled up in my eyes. Not a word had passed between them in all that had happened.

I quickly recovered and said:"Hey Asher, that was very nice and caring of you to comfort Shawna with a kiss to her hand. Shawna? Are you okay?" They both just turned to me, nodded, and went on walking about the grass patch having fun, as before.

As I reflected on it, I realised that they learned this from me. Yes, I'm the sort of mom who would kiss and their hurts away, and hug them to show them that everything is still okay. And young as they were, even before they turned 2 years old, Asher instinctively went to kiss his twin sister's hurt away. Shawna's a tough one, and it really probably didn't hurt very much, but she allowed her twin brother to comfort her anyway. And I loved that.

Asher has always been one to show lots of empathy. There was a time I strained my lower back while conducting a roadshow for my business My First Games (games are heavy!!!), Asher heard me complaining about the aches to hubbs and he asked me "Mummy, where is your pain? Show me where?" I pointed him to my lower back, and he proceeded to rain my lower back with many kisses, kissing my hurt away. He is so sweet!

When I accidentally bump my knee against the kiddy table, I'd go "Ouch!" and Asher and Shawna would immediately ask. "Why you say Ouch!, Mummy?" And I'd reply "Oh, I bumped my knee against the table, and it hurts." Asher will quickly bend and kiss my knee. The same thing happened when I stubbed my toe and he wanted to kiss my toes! I quickly stopped him though "Asher, Mummy's feet's dirty! Don't kiss!" He looked up at me and said "But it hurts, right?" I said "Yes, it does, but it's okay, you can make it better by giving me a big hug and a kiss on my cheek, okay?" And so he did.

One time, my cousin who has migrated to Australia, came back for a visit and we were having a family gathering. He read a story to one of my other cousin's daughter, and when the story ended, he asked for a hug as a thank you. Being unfamiliar with him, my niece refused to hug him. My cousin feigned obvious disappointment and shortly after, walked out of the room to get a drink. Asher saw all of this happen and he followed my cousin out of the room. He walked to my cousin, tapped him on his hand, and said "I will give you a hug."

It's interesting, that even though I consistently encourage all three of my children to "Be kind" to one another and to love and care for each other, it is usually only Asher who chooses to express his care and concern in this particular way. Just yesterday, Asher declared to me "Mummy, I will kiss you infinity times!!!" That got me laughing! "Wow, that's a lot of times! Do you know how many that is?" And he said ""I don't know! But Isaac kor kor says it is many many times!"And how right he is! =) I love kisses from my kids, and I'm so blessed that they would often rain me in kisses! =)

We made our own binoculars out of recycled materials way back in April this year. Take a look at our DIY binoculars made from toilet rolls and covered with magazine paper :) Not too shabby, eh? :p 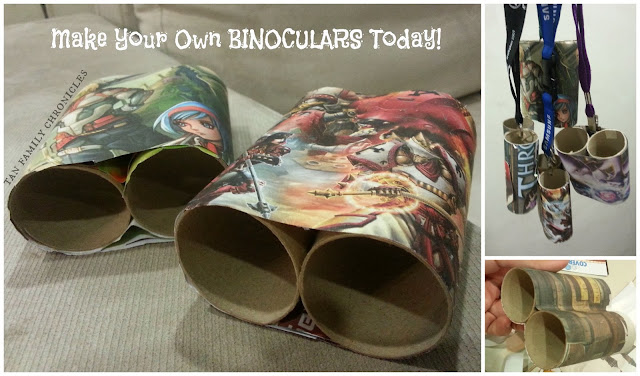 Another very easy craft to make, you basically take two toilet rolls, some magazine paper or wrapping paper, and stick it around the two toilet rolls. I favour using double sided tape, but you can use glue as well. You can also pull the paper straight across the middle (above, left picture), or you can tape it to the contour of the roll (above, bottom right picture), up to you.

Oh and you know all those conferences, or talks you attend that give you all those lanyards? Don't throw them away! Here's a perfect way to use them, just attach them to the binoculars and the kids can hang them from their neck :) They love to do that! 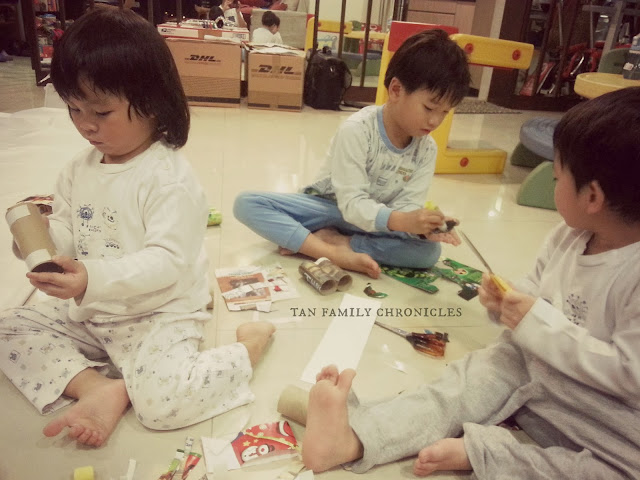 I love crafting, but I don't like the mess of sticky gooey paint here, there and everywhere.I much prefer cutting and pasting of paper - yes I don't mind picking up bits of paper :p So here, I have the kids cutting and pasting paper. If the kids have tons of stickers, or you have a stash of washi tape - now's a good time to break them out! :) Of course, if you really want to, you can paint it!!!

It was so easy to make that we made one for the twins' friend, Aluna, whom we were going to meet for a playdate the following day :) That's why we have 4 binoculars above!