The Lesson on Backgrounds

I've never been very good in art. I can't draw for nuts. Hubbs says he's just as hopeless. So when it comes to guiding the kids on drawing stuff - we're learning right along with the kids. So when an opportunity came up last year for a sponsored session at HeART Studio along with other blogger friends, I jumped at the chance to go.I didn't know much about art nor drawing technicques, but I sure wouldn't mind learning.

So there we were, a bunch of mummy bloggers, going for an art lesson together. It certainly was fun having a lesson together with some friends, instead of strangers. However, I understand that their area of expertise lies in conducting art classes for kids as young as 3 years old. They have canvas painting, 3D painting and even clay modelling. They conduct lessons by the term, as well as have special sessions during the holidays. So if you don't wish to commit to a whole term of weekly lessons, you could do a one off during the holidays. 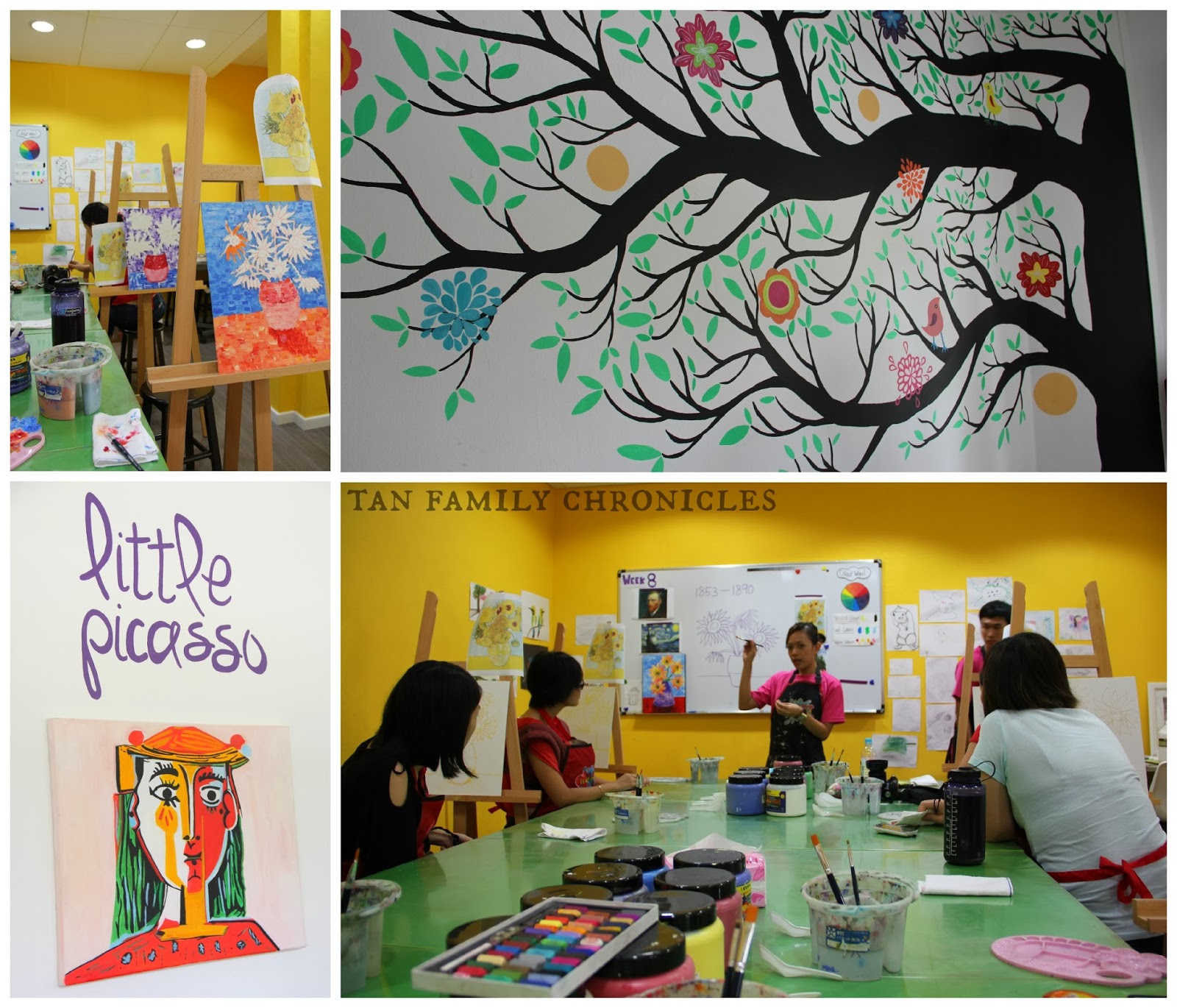 Our session that day was one of canvas painting. They provided everything from the paint, paintbrushes and canvases, to the easels and even the aprons that we wore - to make sure we don't get any paint on our clothes. We were given a small photocopy of Vincent van Gogh's Sunflowers, and told to copy it, to paint it. We were guided to do a rough sketch on the canvas of the flowers and pot, before we started painting it. As we were allowed to choose whatever colour combination we wanted, the anti-establishment sentiment in me dictated that I chose a combination of black and blue to be my background. My table in the picture was a dark mash of green and black. I chose a bright red for my vase and stuck with yellow flowers to balance off the dark background.

And so off we went, choosing our own colours, and painting our flowers. It was amazing to see what the entire class came up with. For, despite us "following" the same picture, our different choices in colours and the unique style and strokes of our brushes resulted in the beautiful works of art that were all distinctly beautiful in their own way. We were one pleased bunch of artists that day.
So I went home and showed off my hard work to hubbs and the kids. Hubbs made appropriate noises of appreciation and the kids were especially excited and envious that I had produced such a beautiful piece of art (in their opinion!). Isaac, in particular, was very jealous and envious of my art, and despondently asked why HE couldn't produce such a piece. I said:"You can! If you try!" I also took the opportunity to point out to him that my artwork was particularly striking as its background was wholly coloured. I had previously been trying to get Isaac to colour his background of his drawings whenever he painted stuff, as I felt that it improved the overall look of his painting and made it look more complete. But he would claim his hand was tired, and refused to colour the background. Thus I made use of this chance to emphasize to him the effect of having the background of the painting coloured as well.
Coincidentally, a few days later, his Teacher Joranna from his Learning Vision childcare, bought some fresh orchids from the florist, brought it to class, and asked the class to paint the flowers. The similarity in the painting assignment must have inspired Isaac and he took pains to paint the entire background of his painting. The results were rather stunning, and soon everyone in class started to want to paint their backgrounds as well. Isaac was very pleased with his painting and proudly showed it to me when I went to pick him up. He hadn't finished painting the background when I picked him up, so I decided to wait and let him finish it, before we left for home.

Teacher Joranna then regaled me withe the stories of how Isaac's classmates, inspired by his painting, decided to paint their backgrounds - and in blue too. I confided in her that Isaac had previously refused to colour his backgrounds, claiming that his hands were tired. Did he not complain this time round? No, she said, he had patiently, slowly and steadily coloured the entire background of his painting. And so it was. In the time that I sat there, talking to Teacher J while Isaac painted, he did not make a single complain.

So my lesson at HeART Studio even taught Isaac a lesson, the lesson on backgrounds :) I thought it was great how the childcare teacher thought to do something as simple but brilliant as bringing real flowers to class to ask the kids to paint them. I think it was only in secondary school when I did something like that. Isaac was really blessed to have good teachers in his preschool.

I think his work of art is more beautiful than mine! Don't you think so? :)