Disney on Ice - The Kids' Review! 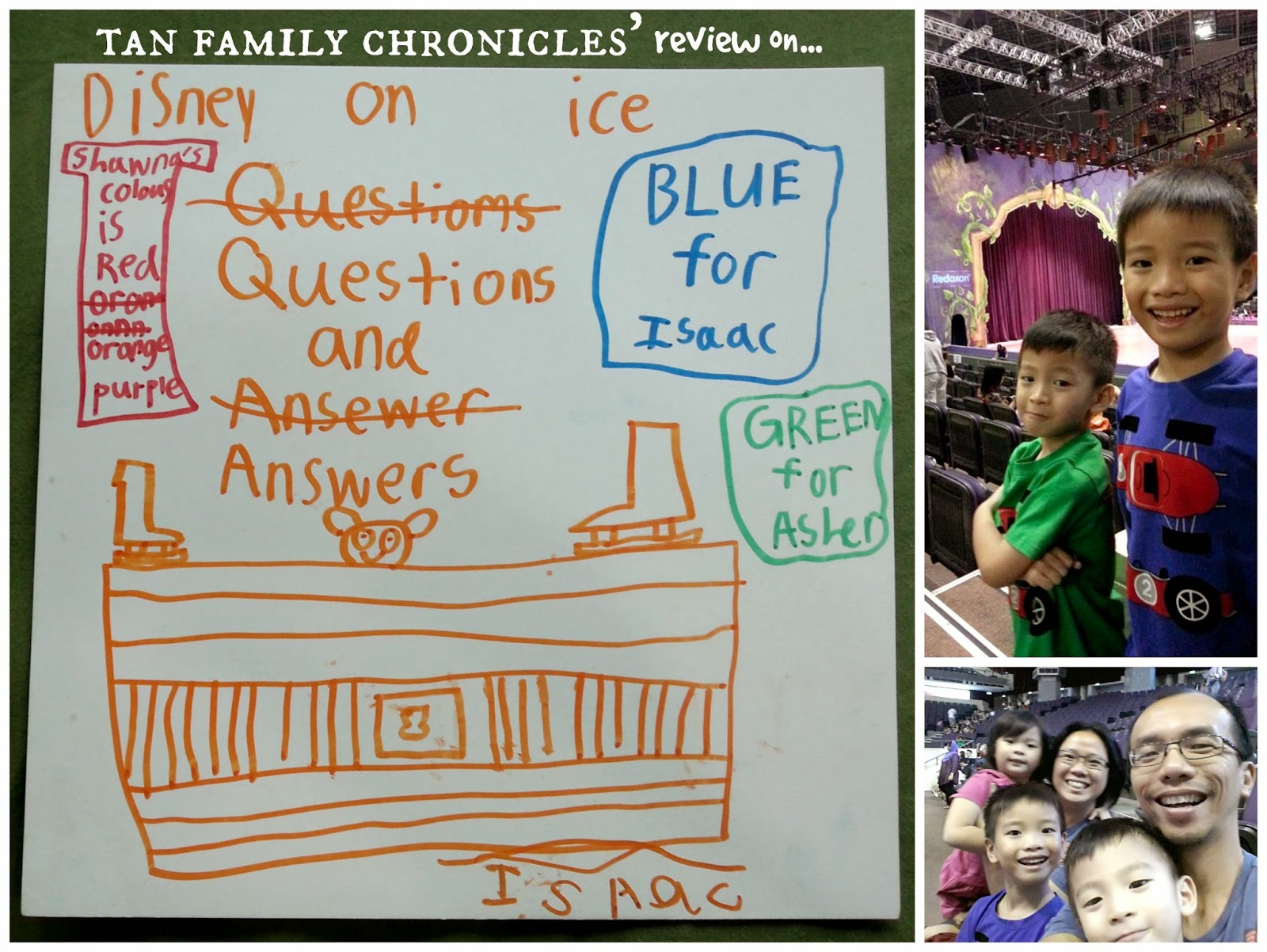 After the Disney on Ice roadshow we went to last month, I didn't actually tell the kids we were going to Disney On Ice. This was because I knew they'd look forward to it soooo much that they would ask for it EVERYDAY. As in, everyday, they'd insist that Disney on Ice was on THAT DAY, and they wanted to go. So for the sake of our own sanity, we decided not to inform them till a few days before the performance. Predictably, the moment we told them we were going to go for Disney on Ice, they asked to go immediately! :p

The day of the performance came, and as expected, the kids really enjoyed it. So much so that they really didn't mind when I put them to work answer questions from me about the Disney on Ice performance. Well, perhaps also because they didn't think it was "work" - the kids enjoy art and craft and have fun drawing and writing, so this was quite a fun exercise for them. I wrote some questions on pieces of card, and asked them to write their answers in their colour so we'd automatically know who wrote what without them writing their names. Isaac in Blue, Asher in Green, and Shawna in Red and Purple and Orange - she wanted to use them all!
Isaac was so amused with the whole exercise that he drew that picture above himself, without me asking him to. I could recognise the ice-skates and Mickey Mouse, but I didn't know what that large thing was. So I asked "Is that... er, Noah's Ark?" "Mummy?!" He said in an exasperated manner "That's the Treasure Chest lah!" Oh right, silly me.

So off they went, writing answers to my three questions:

Isaac had free reign to write his own answers as he could write and spell pretty well, only misspelling Rapunzel's name. Thanks to their childcare Learning Vision, the 4 year old twins can write their alphabet fine, but they can't spell that well yet, so hubbs and I had to help them with the spelling. Shawna would tell me what she wanted to write, and I would spell it for her. Hubbs helped Asher. 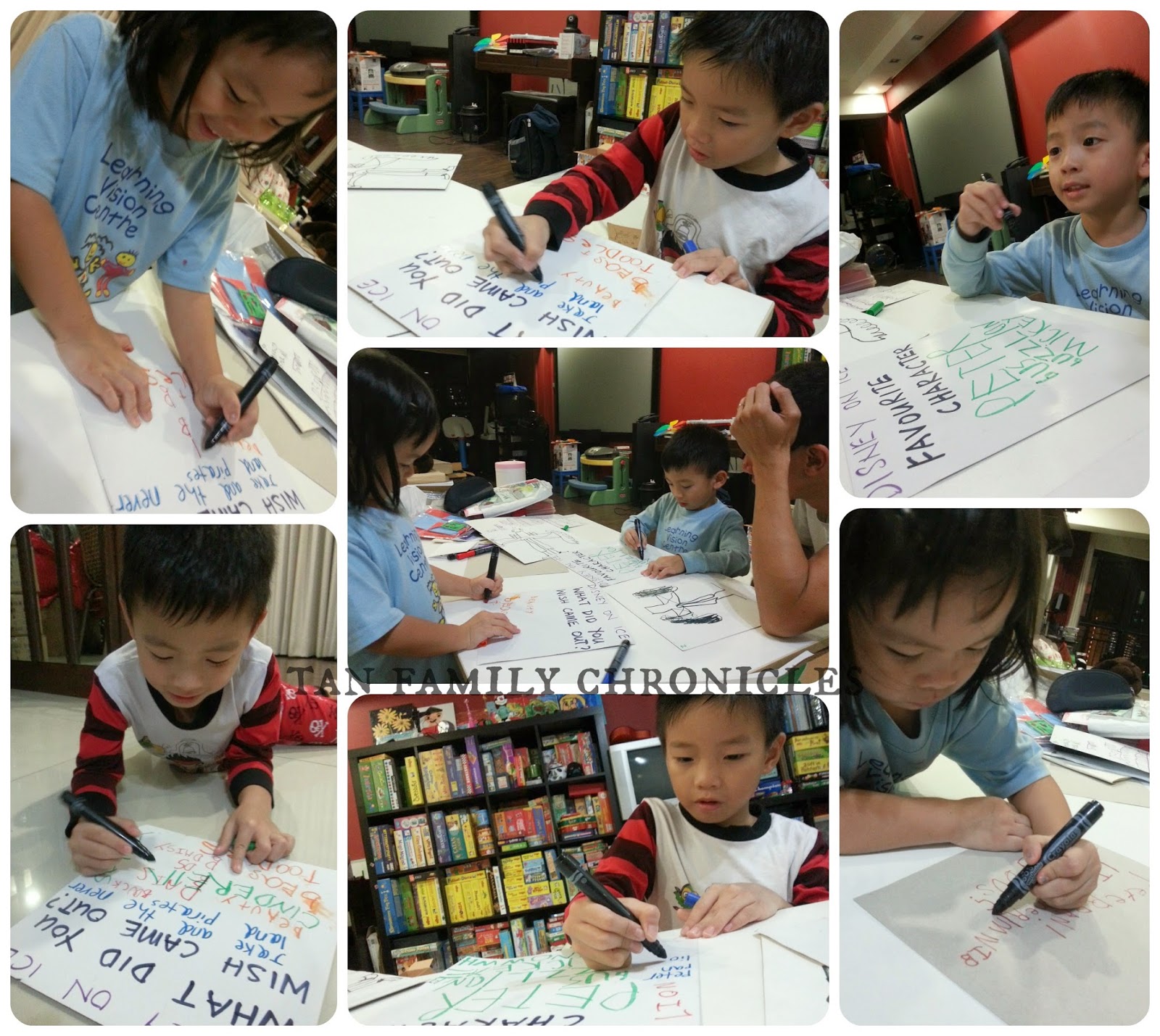 Which were your favourite characters that appeared during the Disney on Ice performance?

Asher: Peter Pan, Buzz Lightyear, Lion (from Lion King), Mickey Mouse and Snow White (he liked the part where she ate the apple and died. *morbid*)

I asked Isaac who Mr Smee was, and he said "He's the stripped fat fellow that is one of Captain Hook's men"... Ah... I never knew...


Personally, the Little Mermaid is a favourite of mine, so I was mighty glad to see that she made (at least!) a brief appearance. I suspect that Isaac liked Rapunzel coz of the damage she could inflict with her frying pan. It reminds me of a book we have at home which is one of our favourites - it's a twist off the Rapunzel tale. In our book, the Wolf is looking for a Tasty Gran to eat her. Gran appears, with a Frying Pan, and promptly whacks him *Biff*Boff*Bang* with the Frying Pan! and says "Take that, young man!" hahaha... we love that book!

What did you like about the performance, other than the characters?
Shawna: costumes, songs
Isaac:  Pixie dust - from Tinkerbelle in Peter Pan, (Giant)Lanterns - from Tangled (Rapunzel), Crocodile - from Peter Pan.


When I asked "What do you like?" the kids immediately rattled off the names of the characters they liked. So I specifically asked "Anything else other than the characters?". Shawna took on my suggested answers of songs and costumes and wrote that down. Asher gave me a blank look and said "huh?". Isaac, took me literally, and said "Pixie dust is not a character. Crocodile also not. And lanterns also not character. " Alriiight.... :p

As for me, I really enjoyed the Lion King segment. I loved how they did the costumes of the animals, especially the ones in the stampede. Each dancer actually more than one animal strapped to him/her, so that it really had the multiplier effect, and made the impact of the stampede felt. The giraffes and zebras and all the other animals too, were very nicely represented. I guess I wasn't that much of a fan of the animals in costumes, and preferred the ones in the Lion King segment.

Which characters did you wish would appear, but yet did not?

Now, I must confess that the kids haven't really been watching many Disney movies, though they have seen my favourites like Beauty & the Beast and Little Mermaid. The kids, however, do get to watch Disney Junior Channel at my in laws' place when they are there. So I wasn't very surprised that they didn't think of many Disney movies' characters they could put down for this question, and yet all three named characters they say on Disney Junior.

Shawna missed seeing Toodles and Daisy Duck - both of which she sees in Mickey Mouse Clubhouse. I'm not sure where Cinderella came from, since the kids have never seen the movie. But Asher went to great lengths to describe Princess Sofia to me when he momentarily forgot her name and insisted I knew who she was. Isaac insisted that Peter Pan was NOT Jake from Jake and the Neverland Pirates. Okaaay...
Yes, my only disappointment with Disney on Ice is that there wasn't a Beauty and the Beast segment, complete with Lumiere and Cogsworth and Chip and his mum. But then I also thought that the Little Mermaid segment was too short. So having said all that, I think what I'm really saying, is that I think I want to rewatch my favourite Disney movies all over again. But the kids, especially my little girl, my Shawna, really enjoyed the show very very much. The moment it ended, she looked at me and said, "Mummy, I want to watch again." :) And I think that says it all.
We were provided tickets to watch Disney on Ice: Treasure Trove. All opinion above belongs to us! :)
Posted by Pamela at 01:23