This is the first blog post by Isaac, our Junior Chronicler! Since starting Primary 1 this year, one of Isaac's  homework is to write a journal entry every weekend. The teacher would state the topic they were to write on, and he would write it in his journal book which is a blue cover jotter book. I was very amused by his entries and already obtained permission for him to publish them on the blog, as blog entries authored by him.

We usually left it to him to write it, only prompting him with some leading questions when he doesn't know how to continue after answering the obvious. I would usually correct his spelling and obvious grammar mistakes, but I would leave his sentence structure and content entirely up to him. We realised we were on the same wavelength as his teacher too, as she did not correct his English either, but instead, wrote comments to his entry after reading it, much like how we would make comments on someone's Facebook /blog post.
This week's topic was "What I want to be when I grow up". I thought Isaac would write about wanting to be an Astronaut, as he had often declared that that was what he wanted to be. Yet, he must have wanted to study dinosaurs more, as he chose to write about wanting to be a Palaeontologist instead.

He asked me how "palaeontologist" was spelt, and I took the chance to teach him how to check the dictionary for words, to check its spelling as well as to look up meanings of words. This was a first for him :) and I was quite pleased that he got distracted along the way when he pointed out words he recognised and read the meanings... "So interesting, right?" I said. And he nodded. Hehehe... subliminal messaging subliminal messaging...
Just for the record, and in case the picture below doesn't show up well, this is what Isaac wrote in his journal entry:

I was quite tickled by this week's entry because of how Isaac ended it. "Huh? What secret? Think what?!" I asked. But he just waved me and my questions away as he picked up his story book to read now that his homework was done.
On a whim, I went to search "Dinosaurs" on The Groovy Giraffe (an online bookstore in Singapore) and up came the many books on dinosaurs below!I'm tempted by the DK Dinosaur Encyclopedia, but most of all by the Dinosaur Cove set! This series of Dinosaur Cove books is the one responsible for two things. Firstly, it's the one responsible for plunging Isaac into the dino-mania he is in that his dearest dream is to be able to see a real dinosaur! Since that was impossible, I could only throw him a dinosaur themed party.  Secondly, that series of books was the series that made Isaac cross firmly from the picture books camp, into the chapter books camp. He still reads picture books for the fun of it, especially when he sees the twins reading them. But this series is to be credited as the one that really showed him how much more rich and interesting books can be when there are lots of words to feed the vast depths of your mind's imagination. 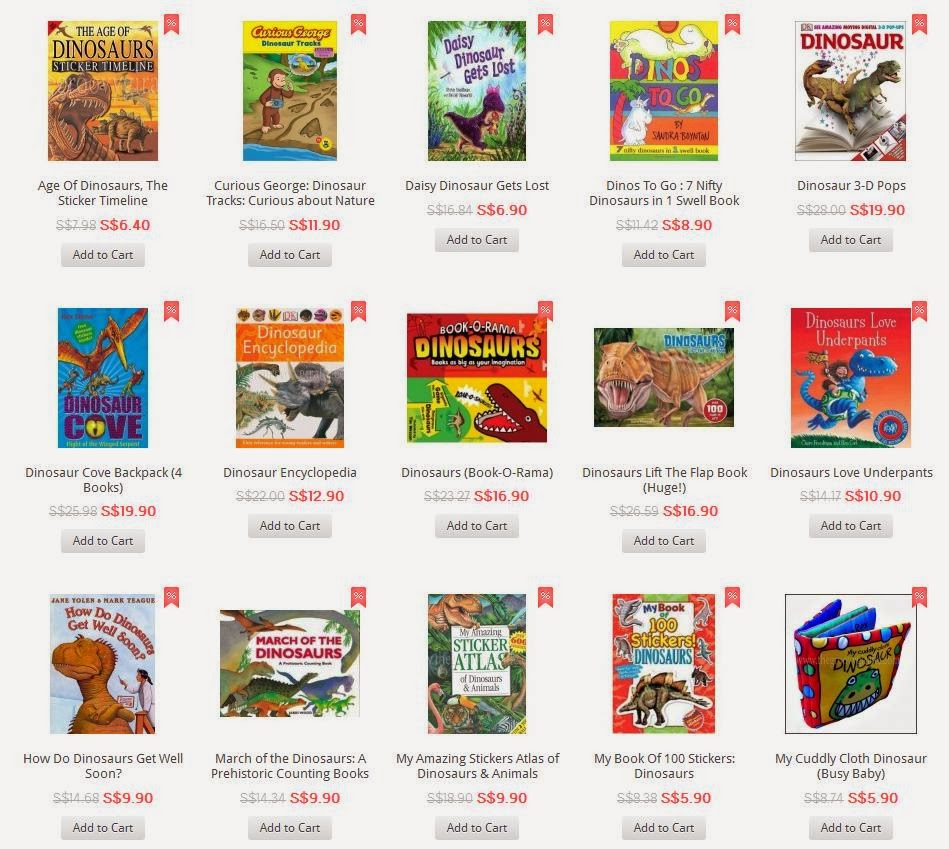 So even though Isaac has certainly read the Dinosaur Cove Backpack of 4 books, I'm quite tempted to get it for Isaac as he really loves the series and wants to read it multiple times. Furthermore, The Groovy Giraffe is having a sale right now! From now till 19th March 2014 - key in TanFam15 to get 15% off the Children Category! Key in TanFamilyC to get 5% off your shopping cart any day of the year - no time pressure!

One thing is for sure, after this blog post, I can definitely spell "palaeontologist" now!!!
Posted by Pamela at 14:44